« Child Struck By Car on Eastern Parkway, Taken to the Hospital by Hatzalah
This Weeks Shalom Zochor List » 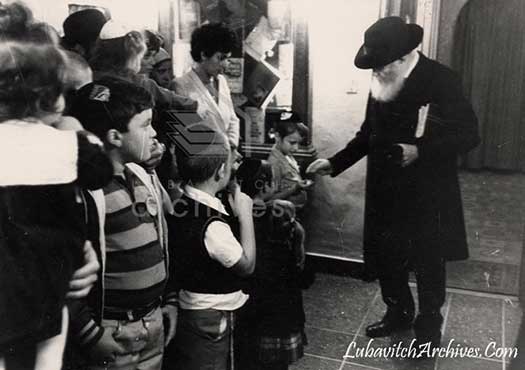 During the farbrengens in the past few weeks, many stories were related about the Rebbe. While all of them are inspiring, I chose to post one that not only is it inspiring, but it is something we all can emulate. I heard it from Rabbi Kasriel Kastel, who shared it on chof ches Sivan this year. On behalf of all our readers we thank him and bless him with continued tremendous success in his shlichus in Tzach (Lubavitch Youth Organization).

One of the peulos (activities) that Tzach was involved in was arranging for groups of Jewish children and teenagers, whether from a school or organization to daven mincha with the Rebbe. The group leader was informed to come at three, so this way all of the boys could be ushered in the beis hamidrash (study hall), where the Rebbe would daven Mincha and find a place to stand, as well as a siddur from which they can daven, if they knew how to read. While the girls or young ladies would stand in the hallway and the Rebbe would acknowledge them.

Initially the groups weren’t so large, but with time they grew and then the logistics became a problem.

The space in the hallway in the front of 770 is not very large, and there is only one entrance to it. So while they came at three and would wait the fifteen minutes until the Rebbe would go to mincha, the bochurim and Anash, would be rushing in a few minutes before Mincha began, and as the groups became larger, it became harder for them to move aside, there was simply no room.

Furthermore, those who were lucky to stand in the front row or front few rows felt seeing and being seen by the Rebbe, was worth it the trip.

However, often some of them didn’t even obtain a glimpse of him. [This occurred when they were older, as the Rebbe would give coins for tzedokah to the younger children]. Then some chassidim complained to Tzach that they missed the opportunity to daven with the Rebbe as there was no path to enter, with squeezing through the crowd, which is problematic.

Additionally, some of the boys and teenagers weren’t comfortable with the pushing and sometimes crowded or packed shul.

So on behalf of the organizers, Rabbi Kastel wrote to the Rebbe and mentioned these questions, wondering if it should be curtailed somewhat.
The Rebbe replied, From now on, you will inform the mazkirus (secretariet) when a group is arriving and mincha will take place downstairs.

Rabbi Kastel noted, I didn’t ask the Rebbe if he would do that, the Rebbe came up with this solution. It took care of everyone’s concern and made everyone happy. The was room for everyone and all the young ladies had an equal ability to observe the Rebbe and participate from the ezras noshim in the minyan.

A few of us said “Wow, such concern and thoughtfulness”, but then someone challenged us and said, what is the wow? Don’t you realize that this is what the Rebbe did for us constantly! Does anyone recall how late Yechidus went on for? Sometimes it finished after sunrise. To the Rebbe every individual was important, and how many times did he inform the mazkir by the door, not to try rush someone out of his room; the Yechidus would end when the person is ready to leave.

He wouldn’t leave any letter that he was ready to answer, unanswered. If that meant taking it home late at night and giving the answer in the morning, that is what he did. He stood on his feet for hours every Sunday to give out dollars, brochos and guidance to tens of thousands of individuals.

Yes he made an effort to help every Jew and non-Jew that came to him. So we as his chassidim can emulate this point and if helping someone else entails changing our schedule or going out of our way, that is what the Rebbe taught us by example.

I thank those of you who informed me that they enjoyed and shared my thought last week at their farbrengen in honor of Gimmel Tammuz. Your feedback is always appreciated. You are welcome to join us in a farbrengen Monday night at Congregation Ohel Moshe Lubavitch at 8:00 P.M. 841 Ocean Parkway, in honor of Yud Beis Tammuz.

Rabbi Avtzon is a veteran mechanech and the author of numerous books on the Rebbeim and their chassidim. He is available to farbreng in your community and can be contacted at avtzonbooks@gmail.com.

« Child Struck By Car on Eastern Parkway, Taken to the Hospital by Hatzalah
This Weeks Shalom Zochor List »