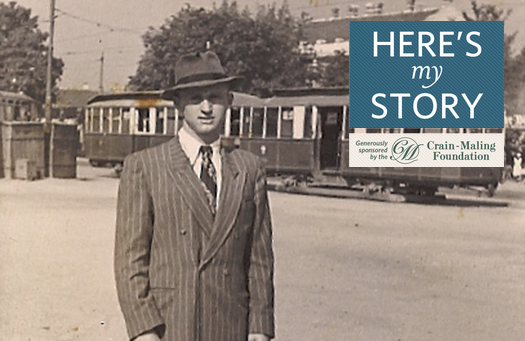 When I was seventeen, the Nazis invaded Poland. After several years, they herded all the Jews of my hometown, Radom, into a ghetto. From there, little by little, most were sent to the Treblinka extermination camp where they were murdered in the gas chambers. My family was among them. I myself was sent to a labor camp from which I managed to escape in 1944, and ever since then, it has been my goal in life to bring the Nazis to justice.

At the outset, I had no idea that I would spend my whole life doing this. I only wanted to devote one year to capturing the SS officers responsible for the Radom ghetto. And I succeeded in this quest. One of the officers, Lieutenant Colonel Wilhelm Blum, was arrested, tried, and hanged. Additionally, we caught two dozen of his accomplices; they were all tried and they served lengthy sentences.

After one year of this work in Poland, I immigrated to Israel – this was in 1946, two years before the State of Israel was founded. There, I worked covertly with the Haganah. In an operation that lasted seven years, we succeeded in orchestrating the arrests of some 250 Nazi criminals, several of whom were sent to Siberia. We were also instrumental in helping the Israeli government capture Adolf Eichmann, the chief architect of the “Final Solution.”

So what started as a one-year commitment ended up being a twenty-year endeavor, all without a salary. No one was interested in paying me for this work. In fact, Prime Minister David Ben Gurion wanted me to stop chasing Nazi criminals altogether. He feared that if we kept at it, U.S. President Dwight Eisenhower would curtail foreign aid to Israel. But I protested that the work was not finished and we needed to hunt them down. So I kept at it.

But there came a time in the 1970s when even my wife felt I had to stop. She was an ophthalmologist, the chief breadwinner and the chief financial supporter of my work, but even she thought that I had done enough. At first I was reluctant, but finally I told her, “I will go to see the Lubavitcher Rebbe in New York. I will describe the situation to him and hear what he has to say. If he can’t suggest another way for me to fund my work, I’ll stop and go into business.”

I asked the Rebbe’s secretary to set up a meeting, which was scheduled for one in the morning. Why? Because that’s when the Rebbe saw people – in the middle of the night! I waited patiently, and finally, at two o’clock, my turn came.

The Rebbe greeted me warmly – he already knew about my work, but he wanted to hear more about it. So I told him about the many Nazis that I had brought to justice. Then I said, “Here is my problem – I have no income. My wife has been supporting me for the past twenty years, and we can no longer afford it. Even though I want to continue, I have no way to fund my work.”

The Rebbe answered, “Can you really stop? How many people are still at it? You and Simon Wiesenthal? Look at what you have accomplished so far. If you abandon this work, the Nazis will rejoice that they’ve won. Can you name someone else who is willing to take over for you? In the past twenty years, has anyone else volunteered? No. No one is interested – there is no one else! So what choice do you have?”

He continued, “You must go from city to city in Germany, bringing them all to justice. This is very important for the history of the Jewish people – all the Nazi criminals must be punished for what they did. And if you don’t do it, who will?”

Then he asked me, “On Purim, do you listen to the reading of the Book of Esther?”

“Of course,” I answered.

He went on, “So you know that Haman is Hitler. And you must give this story the same ending.

“As far as supporting your family, here’s what I suggest: Take your book, We Shall Never Forget: The Final Solution [about the trial of Adolf Eichmann] and translate it into English. Wherever you go to speak in Jewish communities across America, take twenty copies with you. The book will sell, and you will make a living… Look at the millions of creatures in this world; they all eat and survive. G-d looks after all His creations; He will look after you, too.”

I followed the Rebbe’s advice. I went home and took a course to improve my English. And then I went on a speaking tour of Jewish communities in America. I gave speeches for which I was paid; I also sold the English edition of my book – The Hunter. That’s how I generated an income. I even bought my wife a new house.

I was able to continue my Nazi-hunting work for another forty years. If it weren’t for the Rebbe, I would have stopped after twenty years, and some one-thousand Nazis would have gone unpunished for their crimes. The fact that they didn’t was thanks to the Rebbe’s guidance.

Mr. Tuviah Friedman, a life-long Nazi hunter who founded the Institute for the Documentation of Nazi War Crimes, aided in the capture of hundreds of Nazis, including Adolf Eichmann. He was interviewed in his home in Haifa in March of 2010. This story has previously been published in the book My Story.