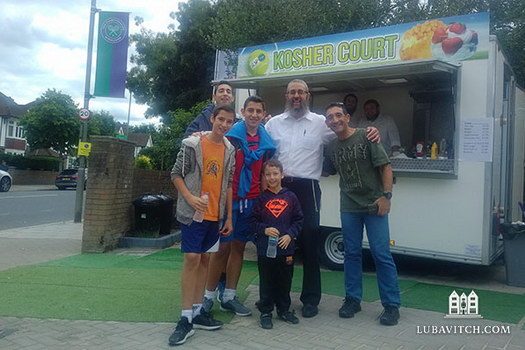 Wimbledon Tennis starts this Monday and for the eleventh year, a kosher food stand will serve the needs of Jewish patrons.

Meshulam Dov, a kosher-observant hedge fund manager from North London, has attended the tennis at Wimbledon every year of his adult life. When asked by Lubavitch.com, what he did before the stand opened, he responded, “I starved.”

But for Rabbi Dovid and Sora Cohen, of Chabad of South London Campuses, the stand is much more than a way to satiate hungry fans. “Our focus is on providing kosher food, but the more powerful experience is the chance for visitors to do a mitzvah while they’re here,” Rabbi Dovid says.

The Cohens arrived in Wimbledon in 2008 to serve the Jewish students and staff on seven of South London’s universities and two of its colleges. They quickly became the centerpoint of Jewish life for over 250 students and young professionals living, working or studying in the area. But for the tireless couple, this wasn’t enough.

“In the summer, student life comes to a halt, as all the students are away, so we asked ourselves what our focus should be at that time,” Sora says.

The Cohen’s home is just around the corner from the golf course where the ticket line for the championships begins. They started using their summer break to focus on the 500,000 tennis fans who flood their neighborhood each year. “People are here enjoying the tournament, it’s a chance to reach out,” Rabbi Dovid says.

They assembled a barbecue, some tables and chairs in their driveway. Alongside the hotdogs and baked potatoes they sold, they offered passersby Shabbat candles and a chance to don tefillin. As the number of patrons grew, they asked the golf club for permission to set up shop on the course itself. The only other food option available on the grounds was from a non-kosher food truck that had been there for the past fifteen years and club owners were worried that the food stand would take away business. Rabbi Dovid explained that they were providing an exclusively kosher service and after a discussion between the Cohens, the vendor and the club, Kosher Court, Wimbledon’s only kosher food stand, came to be.

“Now that we are on location, more people notice us and we get dozens of visitors a day,” Sora says. Along with the Cohens and their grown children, the stand is staffed by Roving Rabbis – Chabad yeshiva students who volunteer a few weeks of their summer to bolster Jewish life in all corners of the globe.

“The work is gruelling, but we are committed,” says Rabbi Dovid. They begin food prep early in the morning so that by the 10:00 AM opening, there is sushi, hotdogs, kebabs, burgers and baked potatoes ready for sale. In keeping with the kosher restriction on mixing dairy and meat Kosher Court sells a pareve (non-dairy) version Wimbledon’s staple, strawberries and cream. They are open until the end-of-play, between 9-10:00 PM.

Many people stop by to lay tefillin or take Shabbat candles or leaflets on Jewish topics. The stand also becomes a central meeting point for those looking to pray with a minyan. “Some of our customers are returning guests, or people who have heard about us through the grapevine, but we also get passerby who had no idea we are here and are pleasantly surprised,” says Rabbi Dovid. Though Chabad of Wimbledon now has an exclusively kosher supermarket, the food stand is the only kosher restaurant or take-out option in the area.

“The stand attracts Jews from every part of society and the Cohens are inclusive, generous and warm,“ says Meshulam Dov. “It’s compelling, people ask questions and I’ve witnessed the answers change their lives.” He says he remembers a Russian girl who happened to be passing the stand and stopped for a hotdog. When she heard the hotdogs were kosher she mentioned that her maternal grandmother was Jewish, but she didn’t think she was. When the rabbi serving at the time informed of her that she was in fact Jewish, the hotdog purchase turned into a two hour conversation, by the end of which the girl was visibly emotional at her newfound identity.

Sora says this is congruous with the interactions they have each year at the stand. “It’s a touchpoint for us. We meet people at the stand with whom we’ve developed long lasting relationships.”

The Cohens will be operating the Kosher Court food stand this year, from July 1-14th on all weekdays. On Friday night, the Cohens invite all to their home for a special tennis-themed Shabbat dinner.