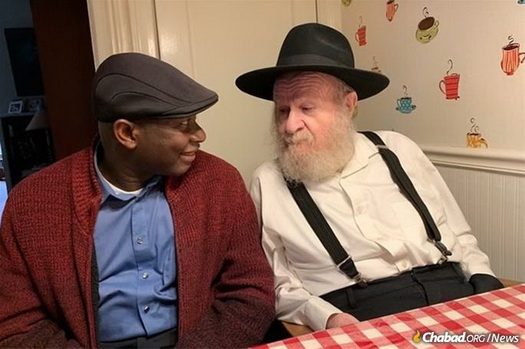 Haitian-born Gabriel Pierre is gentle, kind, thoughtful and eager to help others—the perfect candidate to serve as an aide for an elderly person with dementia. It also made him the perfect candidate for smooth-talking scammers who robbed him of his life savings of $18,500.

Since the money was stolen last month, Ellen Gordon and Rishe Deitsch—wife and daughter of Rabbi Yisroel Gordon, whom Pierre cares for—spent hours on the phone and computer in a vain effort to recover the stolen funds. After filing police reports, and speaking to bureaucrats, lawyers, elected officials and activists, the family finally concluded that the money could not be recovered.

“Gabriel was sad. Devastated. He couldn’t even bring himself to come to my nephew’s wedding, and Gabriel always participates in our family occasions,” Deitsch told Chabad.org. “He just couldn’t come. I didn’t know what else to do. All the lawyers we called said the case was ‘unwinnable,’ and they did not want to waste their time.”

The family decided to collect the money, dollar by dollar, to help put Pierre—whom Deitsch calls “my brother from another mother”—back on his feet.

“Despite my father’s very challenging illness, Gabriel has always treated my father with gentleness, calm and respect,” explains Deitsch, who lives down the block from her father and visits on a daily basis. “Gabriel’s warm smile greets us when we arrive, and when we leave he always thanks us for coming. Every day he puts his own feelings and comfort aside, only focusing on what’s best for our father, may he live and be well.”

During the five years that Pierre has been caring for Gordon, a retired cantor and Jewish educator, he has picked up a remarkable repertoire of Chassidic and Yiddish folk melodies, memorized the blessings said before and after eating, and even learned large parts of the morning prayers by heart.

Lovingly referred to as Gavriel (the Hebrew form of Gabriel), he participated in family events and otherwise became part of the fabric of the close-knit Chassidic community in Brooklyn, N.Y. This made his loss all the more personal for friends, neighbors and others, who have come to know and respect the soft-spoken man with a peaked cap and lilting French accent.

“My father’s home is a sad place now,” attests Deitsch. “This sad story is destroying Gabriel and his family.”

Citing the Jewish law that tzedakah (“charity”) is to be distributed to both Jews and non-Jews, Deitsch’s son-in-law, Rabbi Mendy Heber, launched a Gofundme campaign on Pierre’s behalf. In the first few days, the campaign already raised more than $6,800 in donations and expects to bring in more as the word spreads.

“Gabriel has done so much for our father,” says Deitsch. “He has taught me so much! From Gabriel, I learned the art of communicating without a word. In silence, because my father is frustrated by words he can no longer understand, Gabriel conveys total understanding and compassion. You have to see it to believe it. Even if we manage to raise all the lost money—even if we double it—we will never be able to truly repay him for his kindness to us.”

“Watching the numbers rise makes me feel like part of the family, not an employee,” said Pierre. “G‑d bless everyone.”