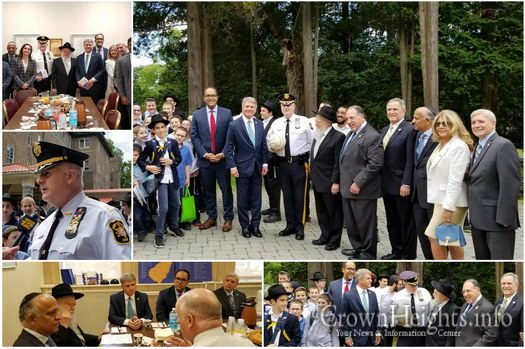 Congressional leaders joined Morris County law enforcement officials Friday at the Rabbinical College of America in Morris Township to discuss security, an issue of heightened importance nationwide in the wake of mass shootings at synagogues in Pittsburgh and suburban San Diego.

“It means personally a lot to me to make sure there is no place for anti-Semitism in this country or in this world,” said Rep. Michael McCaul (R-Texas), former member of the C.I.A., former Chairman of the House Committee on Homeland Security, and ranking Republican on the Foreign Affairs Committee.

McCaul and Rep. Will Hurd (R-Texas), a member of the House Appropriations Committee and co-chair of the new Congressional Black and Jewish Caucus, spoke about a bipartisan measure to bolster security at houses of worship, H.R. 2476, which has been referred to the Senate Committee on Homeland Security and Governmental Affairs.

The bill would provide $75 million for security equipment, personnel, and training to prevent terrorist attacks at non-profit religious institutions across the country.

Spanning 82 idyllic acres on Sussex Avenue, the Rabbinical College of America attracts students from as far as Australia and South Africa to the New Jersey headquarters of the Chabad Lubavitch movement.

According to Morris Sheriff James Gannon, who attended the meeting with Morris Prosecutor Fredric Knapp, four mosques and 34 Jewish institutions in the area have not experienced any security problems.

But the Rabbinical College is a “prime area” to benefit from the bill, said McCaul, who offered to review security measures at the school and assist with grant applications. The visitors were welcomed by Rabbi Moshe Herson, dean and founder of the College.