« Crime Down Citywide, but Crown Heights is Seeing a Spike
This Weeks Shalom Zochor List » 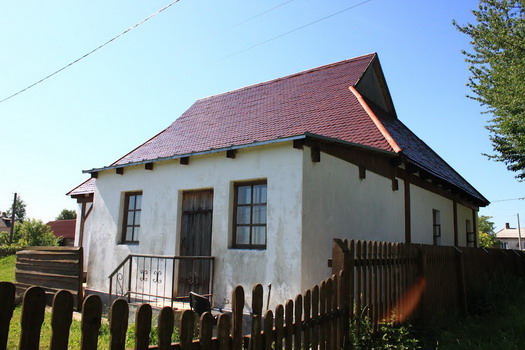 The synagogue of the Baal Shem Tov in Medzhibuzh, Ukraine.

Being that this week is Shavuos and the yahrzeit of the Baal Shem Tov, I am excerpting a story about the Baal Shem from a forthcoming book, Sippurei Meir – The Stories of a Chossid, (which is a compilation of stories which I heard from my father, HaRav Meir a”h).

As is customary at this time, I wish all the readers; to receive the Torah b’simach u’b’pnimous, and I thank you for your feedback.

Some of the Baal Shem Tov’s opponents decided that they must stop the Besht and his movement. They would accomplish this by issuing a powerful ban (cherem) against him.

So that no one would obstruct their plans, it was agreed that the 250 Rabbonim involved would meet at a secret location. In addition, they all swore not to reveal their plans to anyone and to conceal when and where the meeting would be taking place.

The night of the meeting arrived, and all of the participants made their way to the designated spot. After giving the guards a prearranged password, they were allowed admission.

As the meeting was about to begin, one of the guards came in and announced: “Honored Rabbonim, I am sorry to inform you that a terrible mistake has occurred. There are only supposed to be 250 Rabbonim present; however, according to our count, 251 people gave us the password. There is someone here who was not invited!”

Shocked by this announcement, everyone wondered who the extra person was. Furthermore, since all those involved were sworn to secrecy, how did he find out about the meeting?!

Visibly shaken, one of the organizers arose and said: “With the power of the Torah, the Beis Din demands that the uninvited guest announce himself and reveal to us why he is here.”

Everyone was quiet as they witnessed one person arise without any hesitation. “My name is Yisroel ben Eliezer,” he said. “I am the person against whom you are planning to establish a ban. However, you should know that the manner in which you are doing this is against Torah law.

“The Torah states that one is not allowed to judge someone unless the judgment is made in his presence. It also states that the judges must conduct a thorough investigation. Yet, here we have 250 distinguished Rabbonim who are ready to judge me severely both in my absence and without questioning my accusers!”

The Rabbonim were clearly embarrassed; what the Besht claimed was indeed true. One of them stood up and said: “Please tell us one thing. How did you find out about our meeting? Who broke the vow and informed you?”

“No one broke the vow, and no one here told me about it,” replied the Besht. “Your plans were revealed to me from Heaven, so that I could come and prevent such great Rabbonim as yourselves from transgressing Torah law. Furthermore, you should know that you, the 250 Rabbonim present, are gilgulim of the 250 great leaders who joined Korach in his fight against Moshe Rabbeinu. If I don’t stop you before you carry out your plans, the outcome will be as terrible as then!”

Upon hearing these words, all of the Rabbonim trembled. The meeting was duly canceled, and many of those present went home ashamed of their actions.

Before the Besht left, a Rov named Rav Moshe Ostrer approached him and said: “I see that you are a Getliche mentch [a G-dly person]. I have with me here a commentary I published on Shir Hashirim that I am about to send for binding.[1] I would be extremely grateful if you would look it over.”

The Besht took the sefer and leafed through it for a few seconds. He then returned it and said, “Your commentary is excellent. However, you explained every possuk except for one of the pesukim that discuss the words arugas habosem.”[2]

The person was doubly shocked. How could the Besht claim to have read the entire sefer, which was over a hundred pages long, in less than a minute? And furthermore, he knew he had explained every possuk, including that one. So he replied, “I did explain that possuk.”

“Please show me your explanation on that possuk,” said the Besht. The author turned to the proper page, but, to his bewilderment, his thoughts on that possuk were missing. Evidently, the printer had misplaced that sheet.

Now there was no question in his mind that he was dealing with a Getliche mentch. Humbly, he asked, “What shall I do about it?”

[1]. Compiler’s note: In other words, it was already printed but was not yet bound. (In those days, printing and binding were often done separately, and some people would purchase unbound copies, which were cheaper than bound ones.)

[2]. Compiler’s note: These words are mentioned twice in Shir Hashirim, in 5:13 and 6:2. It is not known to which possuk the Besht was referring, as in subsequent printings the missing page was inserted.

« Crime Down Citywide, but Crown Heights is Seeing a Spike
This Weeks Shalom Zochor List »