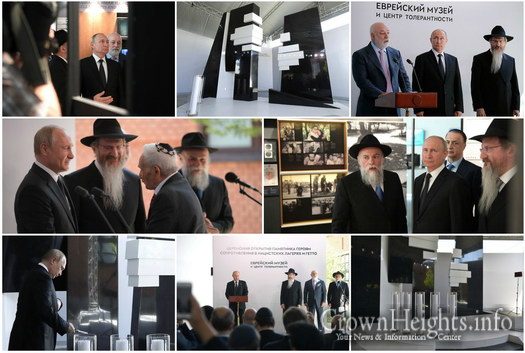 Russian President Mr. Vladimir Putin inaugurated a monument to commemorate the Heros of the ghettos and concentration camps in the Holocaust. The monument stands at the entrance to the Jewish Tolerance Museum in Moscow’s Marina Roscha neighborhood.

Chief Rabbi of Russia Rabbi Berel Lazar, who initiated the building of the Jewish Museum, spoke movingly about Jewish memories from the Holocaust. He also recited the Kel Malei Rachamim prayer in memory of the martyrs.

Mr. Victor Vekselberg, Chairman of the Jewish Museum’s Board of Governors spoke, as did Mr. Ahron Belsky, one of the founders of the Belsky brothers’ partisan unit.

The event was emceed by Rabbi Alexander Boroda, General Director of the Jewish Museum, who worked tirelessly for the establishment of the monument.

Mr. Putin declared: “We will not allow the rekindling of anti-semitism and nationalism. We may not forget the horrors of the Holocaust, and we must remember the heroism of its opponents. There is no forgiving what the Nazis did.”

The impressive monument was erected in the plaza of the Jewish Museum, which has become a magnet for thousands of visitors each week. There they can learn about, and receive a comprehensive picture of, the Jewish people throughout the generations, all the way up to the current revival and renaissance of Judaism throughout the vast country of Russia.