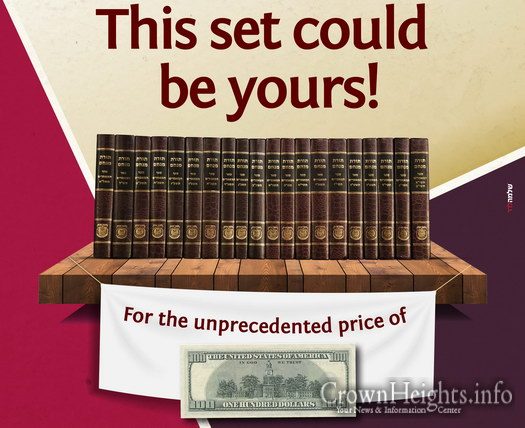 Yeshivah bochurim, Anash communities and Shluchim around the world are beginning their spiritual preparations for the Rebbe’s twenty-fifth Yom Hilulah, on the upcoming Shabbos Gimmel Tammuz 5779.

“The true hiskashrus is created by studying Torah. When you study my Maamarei Chassidus, read the Sichos, and associate with those dear to me – Anash and the Temimim – in their studies and Farbrengens, and you fulfill my request regarding the recital of Tehillim and you are scrupulous regarding your Torah study sessions, this is the hiskashrus.”

Upon the suggestion of Rabbonim and Mashpi’im, a great emphasis will be placed on studying the Rebbe’s maamorim in depth, beginning with the first Maamar, Basi Ligani 5711, through the final Maamar we received from the Rebbe’s hand, V’atah Tetzaveh in 5752.

In the words of one prominent Mashpiah:

“Throughout the Rebbe’s nesius, we heard no less than 1564 Maamarei Chassidus! Now, during Farbrengens in shul or Yeshivah, a Mashpia will often encourage the participants to be fluent in the Rebbe’s words, and will even suggest various options: Lo Sihiye Mishakela 5712, Mayim Rabim 5717, Ki Yishalcha 5738, Basi Legani, V’atah Tetzaveh, and so on.

“This yungerman, shliach or bochur returns home inspired, and decides to begin learning those Maamarim, but he finds that he doesn’t possess these Seforim at all! How could he learn the Maamar and know it by heart? How will he have the Rebbe’s words constantly on his lips?

“It’s not only a deeper knowledge in the Rebbe’s maamarim that can be attained by owning these Seforim. There are also many broader conceptions in the Rebbe’s Torah that can only be realized when you actually own the Sefer. For example: The year 5725 was the year the Rebbe delivered the largest sum of Maamarim – a total of 67! Or 5731, when the Rebbe said a hemshech of nine Maamarim spanning the month of Tishrei, covering many profound concepts in Chassidus…”

In order to help channel this inspiration into reality, Lahak Hanachos is announcing a one-time sale for the entire twenty volume set of the Rebbe’s Maamarim from 5711-5731 for just $100 (360 Shekel in Eretz Yisroel).

The format of the sale will be similar to the sales sponsored by Lubavitch benefactors for the sets of Toras Menachem – Hisvaaduyos from 5711-5730 and 5742-5752.

During the thirty days leading up to Gimmel Tammuz, the set will be available to order for this special price on the website of the campaign, www.lahak.org/25years. In Eretz Yisroel, the set can also be order via telephone to Kehos in Kfar Chabad, 03.9606.018.

The printing will commence immediately following the close of the sale, and at the end of Elul 5779 they will be distributed in the central locations: At the Lahak warehouse in Crown Heights, and in Kehos in Eretz Yisroel. It is also possible to order a delivery to your doorstep, throughout the Unites States and in Eretz Yisroel for an additional cost. Organized shipments will also be sent to England (London and Manchester), Australia (Sydney and Melbourne), Paris, France, and more.

Make a Hachlatah for this Gimmel Tammuz, and order the set today: www.lahak.org/25years