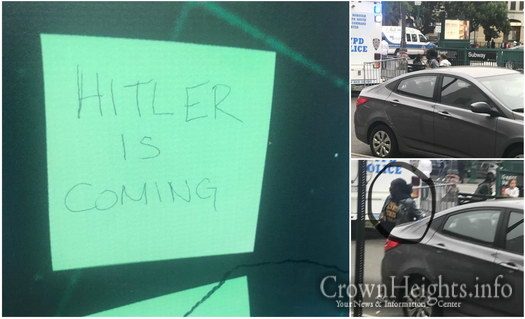 The following editorial was published by the YeshivaWorldNews Editorial Board.

There was yet ANOTHER hate crime targeting the Orthodox Jewish community in NYC, this one in the Crown Heights section of Brooklyn.

A note with the words “HITLER IS COMING” was placed on a wall at the Jewish Children’s Museum on Eastern Parkway on Thursday.

The NYPD Hate Crimes Task Force says they are “investigating the incident”.

Not to miss the opportunity to score points just days after announcing his intention to run for office yet again, NY Governor Cuomo jumped on the bandwagon, and released a lengthy statement saying:

“I am disgusted by the anti-Semitic message scrawled in front of the Jewish Children’s Museum in Crown Heights, Brooklyn. We have zero tolerance for anti-Semitism, discrimination or hate of any kind in New York, and no person should ever feel threatened because of their religious beliefs.”

“I have visited this great museum, built in honor of Ari Halberstam who was tragically killed in an anti-Semitic terror attack on the Brooklyn Bridge, after it received threats in the past. It’s all more distressing for this institution built to bring together children of all faiths and backgrounds to foster tolerance to be targeted.”

“In the wake of a rise in anti-Semitic and other hate crimes in our nation, it is more important than ever that we stand united to condemn these despicable acts of violence and root out hate in all its forms.”

“To ensure those responsible for this heinous act are held accountable to the fullest extent of the law, I am directing the State Police Hate Crimes Task Force to immediately provide the NYPD with any resources needed to assist in the investigation of this incident. Now and always, there is no place for hate in our state.”

But wait a minute.

Haven’t we all heard that 100 times before? “Hate Crimes task Force investigating the incident”? Does anyone think the community actually takes these declarations seriously anymore?

We have witnessed multiple press conferences and statements -‎ one after the next with serious looking elected officials standing next to a few Jewish community leaders, all looking tough for the cameras, hoping to be interviewed and quoted by the media.

Clearly, these conferences and statements mean nothing other than photo-ops and sound bites for elected officials looking to shore up their anti hatred credentials with the Jewish community. We are tired of the same cycle- attack, shock, press conference, rinse & repeat.

Where are the new updated anti-hatred policies by the Mayor and Governor to counter these attacks? Where is the overwhelming sustained police presence? The depraved attackers aren’t on twitter or impacted by the worthless condemnations & press conferences.

Perhaps it is time for the Federal Government to send in the FBI and bypass the NYPD and start making arrests themselves. Federal hate crime penalties are far more serious than the revolving door of the Brooklyn court system. ‎Speaking of local officials where is State Attorney General Letitia James who was strongly supported by the Jewish community of Brooklyn? The dereliction of duty of our elected officials has put us in a very dangerous place. We have had enough promises and vows. Action is needed now.

To add insult to injury, though the National media and the Democratic party would have you believe that it’s white supremacists and Trump supporters solely responsible for rising hate crimes across the United States, nothing could be further from the truth in NYC.

If you need more fuel to prove the pack of lies being spoon-fed to the masses, these same grandstanding officials tell us it’s those “angry Trump supporters who are committing these crimes” when in fact, nearly NONE of the hate crimes against Jews in NYC were the result of a Trump supporter, not unless Trump suddenly has support among 18-year-old minority and illegal thugs living in Brooklyn.

And perhaps Mayor DeBlasio can provide an answer to how this incident took place just a few feet away from an NYPD Command Post that is there 24 hours a day for years. This is all happening in your city Mr. Mayor. While you are busy running around the country speaking to empty rooms, the Orthodox Jewish community is under siege on your watch and people are frightened. Before you consider running for President —

Clean up your city first!