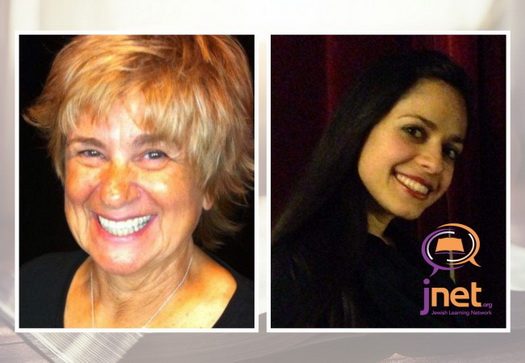 The term “chavrusa” traditionally refers to a small group of students who learn Torah together. For Aura Chaya Gispan (Bitton) and Barbara Freedman, two chavrusas who were paired together by JNet in 2007, their learning partnership quickly evolved into the more literal definition of the word chavrusa: in Aramaic, “friendship” or “companionship.”

Aura Chaya and Barbara came from opposite sides of the country, and their backgrounds couldn’t have been more different. Aura Chaya grew up in Crown Heights, New York, a bustling hubbub of Jewish culture, Torah education and Chassidic community. Barbara lived in Kent, Ohio, a city along the Cuyahoga River, known for its state university but not for its resources on Judaism. Aura Chaya was the oldest of a family of twelve; Barbara was an only child. Aura Chaya was young and searching for her soulmate; Barbara was married, with children and grandchildren.

What brought these strangers together? It started with a JNet application. Barbara Freedman was thirsting. No water could quench this thirst, and even her meaningful job as a family- and marriage-therapist didn’t satisfy her. Barbara was thirsting for truth, for a spiritual reality that could mirror the physical one. She ordered books on religion, studied Torah on the internet, and tried to self educate as much as possible. But nothing could truly satisfy her, so she applied to JNet, and requested a chavrusa who could teach her the mystical elements of Torah.

Enter Aura Chaya. At that point, she was working on helping teen girls in the community through a kabbalistic model of human nature based on the ten sefirot. Naturally in tune with spiritual healing and a lover of all things mystical, Aura Chaya was an obvious match for Barbara, and the connection was made.

There was an instant bond when the two spoke on the phone for the first time. “Honestly, Barbara was just a sparkling woman. She had a deep intuition and curiosity, so our conversation was immediately meaningful.

Barbara wrote to JNet after that first phone call, “Thank you so very much for finding me Aura! She is FABULOUS! We had a wonderful connection. Beyond description actually.”

Their weekly learning sessions ranged from kabbalah and mysticism to Jewish holidays and practical ways to apply Torah into one’s life. Peppered in between, they discussed music and health, family and friendship. It was an interweaving of learning and friendship, and each chavrusa felt she was getting more than she was giving.

Barbara felt like the thirst inside of her was finally being quenched with a spiritual knowledge that she could apply to her life and into her therapy practice. Aura Chaya felt she had found a friend and mentor, who showered her with affection and true wisdom.

“I was single at the time, and Barbara would say Tehillim in English for me every night, praying for me to find my match,” Aura Chaya recalls. “When I got married and moved to Israel, the time difference between us made it hard to keep up our learning session. So I connected Barbara to a different volunteer on JNet. I lost my chavrusa, but not my friend.”

The two maintained their friendship for over a decade.

When Barbara was diagnosed with breast cancer, Aura Chaya flew to Kent to spend a Shabbat with her. Their friendship had always been an “online” one, their communication was always through phone or email. But on that Shabbat, they turned off all technology and spent 25 hours bonding together. In the glow of Shabbat candlelight, they discussed their questions and struggles, their answers and triumphs. It was the last time they’d see each other in person. Barbara Freedman’s soul left her body on Lag B’Omer of 2018. The significance of the date, to Aura Chaya, was profound. The Zohar was a book that Barbara truly loved and lived by, and she passed away on the same day of its author, Rabbi Shimon Bar Yochai.

Though the chavrusa friendship between Aura Chaya and Barbara was numbered in days, its impact is everlasting. This article is לעלוי נשמת בלומה אסתר חיה בת חנה.

JNet provides one-on-one learning on the phone or online for half an hour a week to people all over the world.

Know someone would be interested in learning, volunteering or supporting torah learning? Have them go to www.jnet.org or call or text us at 347-770-JNet (5638)