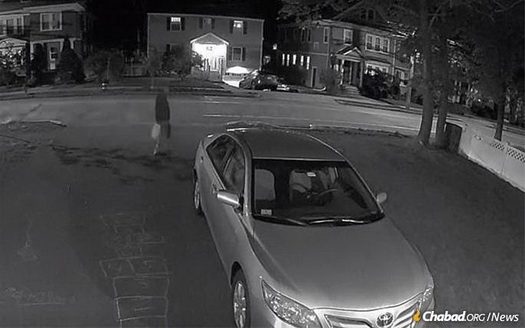 Security camera footage shows an individual police want to question in connection with a fire at the home of a rabbi, which serves as a Chabad community center, in Arlington, Mass., on Saturday, May 11. A second fire was set outside the center on the following Thursday May 16 . A fire was also set at the Chabad center in Needham, Mass, that same night.

Fires were set outside two Chabad centers in Massachusetts on Thursday night, causing damage to shingles and siding at both. A small fire had been set outside one of the centers only five days before.

One fire was set at the Chabad Jewish Center in Needham, Mass., which also serves as the residence for the rabbi and his family, in what appears to be an intentional blaze.

“Thank G‑d, I picked up the smell of fire before anyone else in my house ever smelled it,” said Chanie Krinsky, who directs the center with her husband, Rabbi Mendy Krinsky. “Thank G‑d, Mendy was outside with the fire extinguisher before the smoke alarms even went off. I woke my kids and jumped into the car and turned on the heat for them. Hashem has really been watching over us and the only damage was outside to some shingles.”

Right around the same time, 11 miles north, at the other end of the Boston metropolitan area, a fire was set at the Chabad Center for Jewish Life, directed by Rabbi Avi and Luna Bukiet in Arlington, Mass. It was the second time that the center, which also includes a prayer space, Hebrew school, and rabbi’s residence, had been set ablaze in a five-day pocket.

“We had Hebrew school as usual on Thursday afternoon,” Luna Bukiet told Chabad.org. “As a precaution, we had a plainclothes officer outside. He went home and then, around 9 p.m., I was sitting and reading and I smelled smoke through an open window.”

Bukiet says that the smell was especially strong since there was plastic wrap covering the damage from the first fire that had been caught up in the blaze. She called 911 and she and her husband removed the children from their home even before the fire alarms went off.”

Despite the ordeal they have been through, Bukiet says that Shabbat services will go on as usual, and both Krinsky and Bukiet expressed their gratitude to local law enforcement and fire departments, which have been supportive and are working on solving what appears to be a string of arsons.

Even as Krinsky noted that the development is “extremely unsettling,” her message was a positive call to action: “Hate can’t be reasoned with. Hate just needs to be eradicated. A little bit of light dispels a lot of darkness. Please take this opportunity to help us end this darkness. Do a mitzvah today to bring more light into this world! Tonight we will usher in the Shabbos with our candles, our opportunity to add more light. Please join me and make your home a home with more light.”