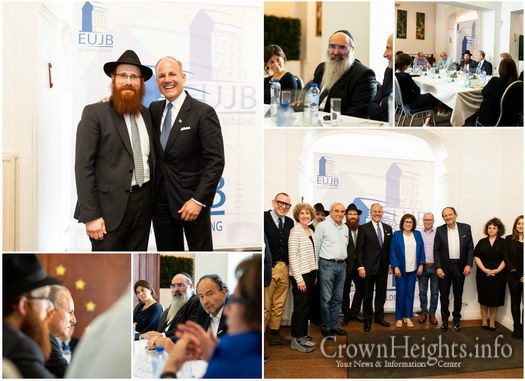 At the behest of the U.S. Mission to the European Union, Rabbi Michoel Rosenblum, Executive director of the EU Jewish Building (EUJB) and Rabbi of the European Synagogue, organized a round-table meeting with Civil Leaders of EU and Belgium Jewish organizations, and special envoy Elan Carr.

The meeting was an open discussion with (SEAS) United States Special Envoy for Monitoring and Combating Anti-Semitism, Elan Carr at the EU Jewish Building.

SEAS Elan Carr quoted freely the current Torah portions during the conversation, pointing out that the Jewish people are strongest when united, and was encouraged to see that unity at the EUJB.

During the meeting, many ideas were exchanged and discussed with regard the top current challenges facing European Jewry.

Antisemitism needs to be fought on all fronts regardless of its modern packaging, including Israel bashing in the name of “humanity”.

Rabbi Rosenblum focused on the positive aspect that being and living a Jewish life is probably the best way to fight Antisemitism in many cases, and perhaps its’ best antidote.

Just coming from a meeting with his EU counterpart, SEAS Carr was encouraged to have some partners.

The meeting ended with an upbeat feeling to continue to working together.