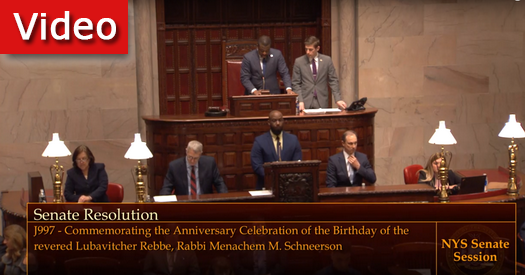 The Resolution was presented to Rabbi Shmuel M. Butman, Director of the Lubavitch Youth Organization.

Speaking in support of the resolution, Senator Myrie said:

“It is important for us to pause and to truly recognize the work that the Rebbe did, as we are facing many anti-semitic attacks throughout our nation. Just two weeks ago, we saw something incredibly tragic happen. We saw people attacked specifically because of their faith, and it is something that has not been unique to the other side of the country; right in Brooklyn, in my district, we have seen an uptick of attacks on people simply because of their faith. We are living in incredibly dangerous times. And it is important that we speak to our unity, we speak and stand for the things that the Rebbe stood for, the education and edification of everyone, no matter what their race, ethnicity, or faith is.”

Rabbi Butman offered the opening prayer during the Senate proceedings. See the Resolution below:

COMMEMORATING the Anniversary Celebration of the
Birthday of the revered Lubavitcher Rebbe, Rabbi
Menachem M. Schneerson

WHEREAS, The true architects of society and community are those
individuals whose faith and unremitting commitment serve to sustain the
spiritual and cultural values of life; the Lubavitcher Rebbe, Rabbi
Menachem M. Schneerson was surely such an individual; and

WHEREAS, World Jewry is now celebrating the 117th birthday of the
renowned and revered leader of World Jewry, the Lubavitcher Rebbe, Rabbi
Menachem M. Schneerson; and

WHEREAS, Serving over 44 years of dedicated leadership, Rabbi
Schneerson established over 1,500 Lubavitch Centers, helping people of
all walks of life throughout the world — from Australia to Africa, from
Holland to Argentina, from Moscow to Mumbai; and

WHEREAS, Rabbi Schneerson’s educational activities throughout the
globe have enriched and strengthened the religious, educational,
cultural and ethical fibbers of all citizens of the world; and

WHEREAS, He was a remarkable and holy man who inspired millions of
Jews and non-Jews to greater dedication, loyalty and commitment in all
matters “between man and G-d” and “between man and man”; and

WHEREAS, Rabbi Schneerson proclaimed the Redemption was on its way
and he called upon all citizens of the world to prepare with a personal
commitment to increase all activities of goodness and kindness; and

WHEREAS, Today, in the United States of America, the Chabad
Lubavitch movement has institutions in every State of the Union; and

WHEREAS, Globally, the Chabad Lubavitch movement operates over 5,000
centers in over 1,000 cities in 102 countries all over the world; and

WHEREAS, During the last 78 years, since 1940, the Chabad Lubavitch
movement has their World Headquarters in the State of New York; and

WHEREAS, A Memorial Reception will be held in the New York State
Capitol on Monday, April 8, 2019, in tribute and remembrance of Rabbi
Schneerson, the leading rabbi of his generation; and

the devotion of his followers and the admiration and respect of his
fellow man; now, therefore, be it

RESOLVED, That this Legislative Body pause in its deliberations to
commemorate the traditional observance of the Anniversary of the
Birthday of the Lubavitcher Rebbe, Rabbi Menachem M. Schneerson, upon
the occasion of a Reception to be held in the New York State Capitol on
Monday, April 8, 2019, and to recognize April 16, 2019 to August 10,
2019, as “117 Days of Education” in tribute to the educational endeavors
of the beloved Rebbe; and be it further

RESOLVED, That a copy of this Resolution, suitably engrossed, be
transmitted to Rabbi Shmuel M. Butman, Director of the Lubavitch Youth
Organization.