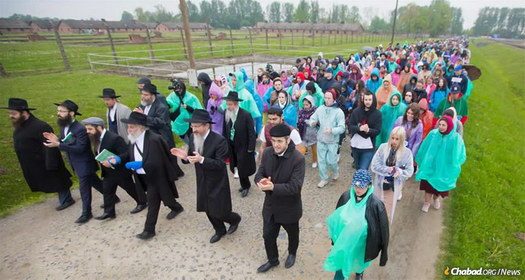 Just weeks after the horrific anti-Semitic shooting attack at Chabad of Poway that took the life of a congregant and injured three others, the synagogue’s rabbi, himself injured in the shooting, visited the Auschwitz concentration camp in Poland, where more than a million Jews and others were murdered by the Nazis during the Holocaust. He proclaimed a message of Jewish resilience to a group of 800 Jewish young people from the Commonwealth of Independent States on their annual “Eurostars” trip to sites of Jewish interest across Europe.

“Am Yisrael Chai!” he cried out. “The Jewish Nation endures.” His call was echoed by hundreds of voices.

As the visitors donned ponchos to shield themselves from the driving rain, Goldstein continued, his words translated into Russian for the benefit of the crowd. He spoke from personal experience, recounting the horrifying moments when he stood face-to-face with evil. He described the choice he faced: to drop to the ground and try and save himself from the gunman’s bullets, or to stand, risk injury and death, and save others. He chose the latter. As bullets flew around him, grievously injuring both his hands, Goldstein whisked children to safety.

“I knew that the job of a Jew is to save others, no matter what.”

His finger shot off, Goldstein got up on a chair and told his congregation, “Am Yisrael Chai! Nothing will take us down! This is what the Rebbe [Rabbi Menachem M. Schneerson, of righteous memory] taught us, this is what we live with. We are going to stand tall, we are going to stand proud of who we are, of our heritage … and we’re going to get through this.”

Organized by the Yahad special programs platform headed by Rabbi Mendy Wilansky, under the umbrella of the Federation of Jewish Communities of the CIS, Eurostars rewards young Jews who have made a significant commitment to Jewish study with a trip to several European countries, where they visit local tourist destinations and places of Jewish historical import.

This year, the group’s itinerary included a visit to Rome, where they held a Torah reading in the Coliseum, met with Italian Prime Minister Giuseppe Conte in the Great Synagogue of Rome, and explored the history of the 2,000-year-old Roman Jewish community along with some of the Chabad Rabbis who lead it today, as well as Italian-born Chief Rabbi of Russia Berel Lazar.

Other highlights of the trip included an evening with Russian producer, musician, and comedian Semyon Slepakov, as well as an address from Alexander Friedman, a leader of Israel’s Beresheet lunar landing project.

For Rabbi Yisroel Goldstein — and for everyone gathered at the site where so much Jewish blood had been shed — these words of endurance and faith held special meaning.