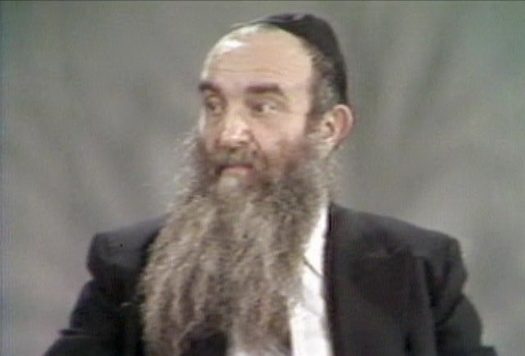 Rabbi Sholom Ber Gordon was called into the Frierdiker Rebbe’s room and he was given a one way bus ticket to Newark, New Jersey. The Frierdiker Rebbe sent him on a shlichus, and for close to sixty years, he devoted his life to this shlichus in Newark, and then in Maplewood.

His shlichus was multi-faceted and many people would point out his different and numerous accomplishments. But everyone agrees that mivtzah tefillin was extremely dear to him, and he would constantly encourage and assist Jewish men to put on tefillin. So obviously, being that he was the chaplain in one of the hospitals there, he encouraged patients and the doctors to put on tefillin as well.

Since he conducted himself with humility and without any ego, he was beloved by everyone whom he was in contact with. They recognized that he was for real. Nevertheless there was one top Jewish surgeon in the hospital that would always reply, “Rabbi you know I love you dearly, and will do anything you ask of me, but I am not going to [change my “religion”, and] put on tefillin.”

When he was ill, he was told he must undergo a surgery. Being the chaplain in the hospital, he knew exactly how long these surgeries last, and he expected his to be for at least four hours.

When he awoke from the surgery, he noticed that not even an hour passed and he immediately understood that it meant that the disease spread and there was no longer any benefit in having the surgery.

A short while later, the surgeon came in very solemn and said, “Rabbi I see you understand the situation, but if there is anything I can do for you, I will do it.”

Reb Sholom lifted his eyebrow and looking directly at the surgeon, he inquired, “Anything?”

The surgeon replied, “Yes Rabbi, anything.”

Reb Sholom said, “If so, please put on tefillin today.”

The surgeon could no longer refuse. If at this time in the Rabbi’s life and situation, his deepest request is to put on tefillin with another Jew, how can he refuse him? He saw that Rabbi Gordon wasn’t doing it as a job or obligation, but it was a mission that was truly personal and meaningful to him, so he allowed Rabbi Gordon to assist him in putting it on.

I was reminded of this story, as I was thinking what I should post concerning the CAMP FUND AUCTION, which is in memory of my brother in law Avrohom Eliezer hy”d Goldman, that is taking place in two weeks, on Sunday, May 26, Chof Aleph Iyar.

After he was savagely murdered on the corner of his block, on the 27th of Sivan 5737/1977, the family and friends, namely Rabbi Eli a”h & yibudel lchaim tovim Mrs. Lipsker, were thinking what can they do in his memory. Upon the guidance of the Rebbe, a camp fund was opened, to help children, boys and girls, enjoy a summer in a camp environment, and not be losing out because their parents are going through financial difficulties. Schools give scholarships much easier than camps do.

My in-laws and the Lipskers could put together the money the family and friends give and distribute it to people they know are in need. But to them it is a mission to perpetuate Avremy’s love and kindness to others, as well as fulfilling the Rebbe’s directive of helping as many people as possible.

There are various prizes, something for everyone and please contribute according to your means and buy tickets for a few prizes. Or if you would like to sponsor a child, for just $566.00 you can have a have a ticket in 88 prizes, which have a total value of $1315.

In the name of the family and especially on behalf of the hundreds of children that benefit from this, I thank you. Click here to go to the website www.thecampfund.com

Rabbi Avtzon is a veteran mechanech and the author of numerous books on the Rebbeim and their chassidim and is available to farbreng in your community. He can be contacted at avtzonbooks@gmail.com