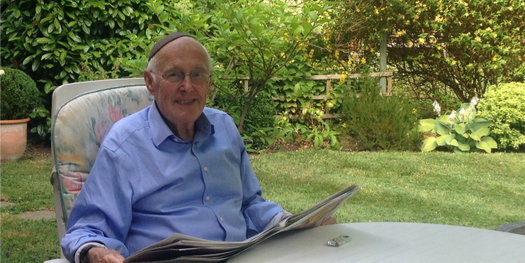 Last Tuesday morning, accompanied by an intimate group of family and close friends, my grandfather Peter Kalms was laid to rest on the Mount of Olives in Jerusalem.

He was a man who wore many hats — shrewd businessman, author, passionate philanthropist and activist — but to me, my siblings and cousins he was simply Zaidy.

Born in pre-war England in August 1929, he would recount spending childhood afternoons lying in the open fields at his north London school watching dogfights with his friends as the Battle of Britain raged in the skies overhead.

Zaidy trained as an accountant and met my grandmother Esti Weinstock while doing work for an important client. They married in 1955 and settled in Edgware. They had four daughters, Tanya, Miriam, my mother Penina and Chavi and later moved to London’s Highgate neighborhood.

Zaidy’s business exploits were extensive. In 1961, he joined the board of Dixons, a chain of camera and electronic retail shops run by his cousin Stanley (now Lord Kalms). In his role as deputy chairman and finance director of the Dixons Group, he helped spearhead the company’s rapid national growth. He took the company public and oversaw several strategic acquisitions. In 1980, he left Dixons to focus on other endeavors.

Among them were a number of companies that merged technological advances with commercial utility. He served as chairman of Solmecs, Flo-Ice and TFC Power Systems. In 1984, Solmecs built a 50 KW magnetohydrodynamic generator at Ben Gurion University, a joint project with Israel’s Trade and Industry Ministry. He was also among the founders of Vision RT, an enhanced surface imaging company with technology used to treat cancer patients.

He served for many years as one of Chabad UK’s primary lay leaders, overseeing the development of a new headquarters in Stamford Hill. In 1967, following Israel’s successful capture of eastern Jerusalem in the Six-Day War, Zaidy contributed substantially to the refurbishment of the iconic Tzemach Tzedek synagogue in the Old City.

His commitment to Chabad was highlighted during a particularly pivotal moment in 1971 in which he informed the Rebbe of his plans to make aliyah. He had bought a property overlooking Jerusalem’s Old City and begun to delegate his business duties in London, fully convinced, he later said, that “the right thing for us to do was to go to Israel, to contribute to Jewish life there.” The Rebbe responded by asking if Zaidy was seeking his blessings or his advice.

“In every way, this would be the wrong thing for you to do,” the Rebbe told him starkly. “Every one of us has been mobilized by Divine Providence to wage the battle for Yiddishkeit in a specific place, and it’s not for a military man to forsake his post.” Zaidy changed his plans to move to Israel and never looked back.

In the 1970s, as the Jewish community of the Soviet Union faced increasing troubles, Zaidy took a personal interest in their plight. He joined forces with Russian-Israeli physicist Herman Branover to form Shamir in 1973. The group became the leading publisher of Jewish texts with Russian translation and offered a free employment placement service to immigrants. In 1976, Zaidy traveled on a fact-finding mission to the USSR, meeting with local activists, including famed dissident Natan Sharansky. On attempting to leave the country his notes were confiscated by the KGB, the feared Russian intelligence agency. It was later reported in the Soviet trade union newspaper Trud that he had been permanently banned from the country.

His giving was not measured to correspond with his income and at times he seemed to disregard his own financial security. He gave generously when he had as well as when he didn’t, never turning away an outstretched arm. As a teenager, I once asked him if he was considering upgrading his trusty old Jaguar he had been driving for some time. “My car works fine,” he responded. “I haven’t had a problem with it in years, so why spend all that money when there are people who need it much more than I do.”

He had plenty to share on most every subject — politics, art, vacation destinations, kosher chocolate, the benefits of pineapple in curing gout, the best brand of car to drive. He was never plagued by doubt, and when he had a viewpoint — and he usually did — he was certain of it.

His legacy is one of altruism over materialism, of the sharpest focus on life’s real priorities, of financial success only as a means to a greater end.

Zaidy has left us all with a challenge, a calling and big shoes to fill. Zaidy, we won’t let you down.

Dovid Efune is the editor-in-chief and CEO of The Algemeiner. This article was originally published by The Jewish Chronicle.