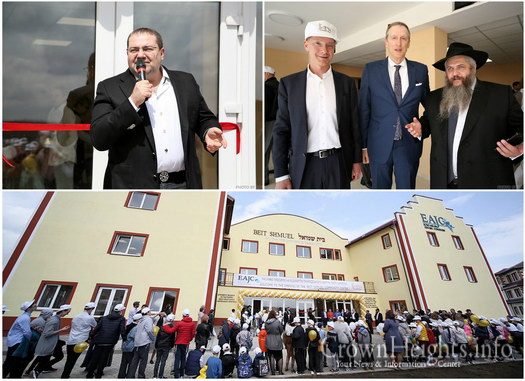 The Center was named after Alexander Levin’s brother, Shmuel, who tragically lost his life a few years ago, and is dedicated to his memory. The new Center occupies an area of 1,800 sq. m and spans three floors. The space will serve various community needs and function as a medical rehabilitation center.

Rabbi Moshe Azman, a rabbi and Chabad shliach in Kiev, who bought this land together with the village of Anatevka, famous as a site of Sholom Aleichem’s story and a Hollywood musical, Fiddler on the Roof, which is based on it, 4 years ago to date, affixed mezuzahs on the doors of the Center and on one of the 7 houses of the Museum of Hasidism in Ukraine encircling it.

The EAJC delegation led by Michael Mirilashvili also visited Kiev on the occasion of the Kyiv Jewish Forum, the first international Jewish conference in Ukraine and one of the largest of its kind in Europe. EAJC was the partner of the Forum’s main organizer – the Jewish Confederation of Ukraine.

Following the official opening ceremony, the guests were invited for a tour of an adjoining heder, a Jewish day school for boys aged 5-13, and a unique wooden synagogue. The tour was followed by a celebratory luncheon for all the guests.

EAJC President Mirilashvili, who has personally supported many of Rabbi Azman’s projects, noted that every time he visits Anatevka, he finds a new great project successfully completed, another small miracle wrought. Anatevka is home to the grave of Rabbi Motel of Chernobyl (the Chernobyl Rebbe) and is on the way to Berditchev.