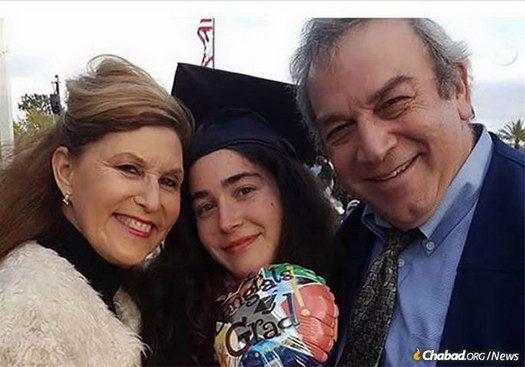 Lori Kaye with her daughter, Hannah, and her husband, Dr. Howard Kaye

Lori Kaye loved greeting cards; she had one for nearly any occasion. Whether a birthday, anniversary or condolence, someone leaving on a trip or returning from one, Kaye pulled one out from her vast collection, wrote a message and delivered the card.

“She knew what everyone was up to, what was happening in their lives, and she cared to make them feel special,” shares her longtime friend, Teresa Lampert. “She was an incredible person.”

Kaye was killed on Shabbat morning, the last of the eight days of Passover, during the anti-Semitic shooting attack at Chabad-Lubavitch of Poway that shocked the nation. She had just stepped out into the lobby to check on the children’s group in the playground when the attacker burst into the building and shot her. Kaye, a woman remembered for her kindness, sensitivity, enthusiasm and generosity, spent her last minutes on earth in the lobby of the synagogue and community center she had done so much to see into reality.

She personified the meaning of a “true woman of valor,” says Chabad of Poway’s founding director Rabbi Yisroel Goldstein—who, together with two others, including an 8-year-old girl, was injured—and was “a great philanthropist, a kind-hearted person, always there for others.”

It was Kaye’s energy and attention to detail that made her truly unique says Lampert, who was with her during her final moments.

“She had such little time to rest; she was always doing good, making people happy, that’s who she was,” says Lampert. “Nobody could keep up with her.”

Shabbat at the Kaye home was a thing to behold, with Lori’s table intricately set up for a large number of guests. Her freshly baked challah was famous in Poway, as was her matzah-ball soup and chicken.

“It was always incredible,” says Lampert of those meals. “And somehow, even when she had all of these guests, if she heard that someone wasn’t feeling well or for any other reason, she found time to deliver challah or a bouquet of flowers to several homes each week.”

The Lamperts and their two children have joined the Kayes and their daughter, Hannah, at their Passover seder for more than two decades, including this year’s seders less than two weeks ago.

“We said, as we do every year, ‘We need to keep the tradition going,’ ” says Lampert.

The Kaye’s post-Yom Kippur break-fast was another regular event hosted by the couple—a community-wide event that drew everyone.

“You didn’t need an invitation to come,” says Lampert. “It was a given.”

Lori (Leah) Gilbert-Kaye was born in San Diego on Aug. 10, 1958—she would have turned 61 this year—and graduated from the University of California, Los Angeles (UCLA). Aside from college and a short time spent living in Long Beach, Calif., with her husband, Dr. Howard Kaye, she spent most of her life in the San Diego area, to which she returned to be closer to her parents and family.

Kaye was a devoted member of the broader Jewish community and, together with her husband, a pillar of the Chabad of Poway community, which she joined in the early 1990s. Some time after Goldstein and his wife, Devorie, arrived in Poway in 1986, they purchased an empty lot where they hoped to one day build their Chabad House, synagogue and Jewish center.

“When we bought our property in the 1990s, she secured us our very first construction loan so we could build a shul,” recalls the rabbi. “And she has been with us since.”

“Everyone knew her, and she knew everyone,” says Lampert. “She was a huge part of this community; she participated in all events and was loved by everyone.”

It was through the Chabad community that Lampert met her friend Lori in the first place. Two decades ago, a friend suggested that Lampert, a native of Peru living in California for the last 26 years, check out Chabad. She and her husband did, and they loved it. The rabbi was warm, the community welcoming. That was when Lampert met Kaye.

“Lori and I hit it off,” she says. “It was just one of those friendships that flourished.”

She notes that Kaye’s generosity extended well beyond her own community. Kaye was active with the Hadassah Foundation, Chai Lifeline and other organizations. And, like the little details she always remembered, she was always on the lookout to give more. Lampert is a tour group manager and travels for business. Whenever she would go to a foreign location, Kaye would make sure to send along a check with Lampert to be donated locally.

“I would go to South America, Spain, Portugal, Alaska, and she would always send a check along with me for the Chabad House there.”

There was always a personal touch to her generosity as well. Lampert’s son serves as a volunteer lone soldier in the Israel Defense Forces. On a recent trip to Israel, Kaye met up with Lampert’s son in Jerusalem, spending time with him and taking him shopping. Kaye reported back to Lampert that her son was doing well, and that they had gone out to a restaurant before parting.

“She told me, ‘I didn’t send him back hungry, I sent him back really full!’ ” recalls the thankful mother. “Lori took care of all the details.”

The eighth and last day of Passover, Acharon Shel Pesach, is one of joy traditionally associated with the Jewish people’s hopes for the coming of Moshiach. It’s when Jews in synagogues around the world hear the words of the prophet, read in the haftarah, regarding the future era of peace when “the wolf will dwell with the lamb; the leopard will lie down with a young goat.” This was precisely the haftarah Goldstein was preparing to read in his synagogue when he stepped out of the sanctuary to review it one last time. There, in the lobby, he bumped into Lori, who had gone out to check on the children’s program.

The eighth day of Passover is also one of the four times a year when the Yizkor memorial prayer in memory of departed parents is recited in synagogues. Kaye, who lost her mother recently, asked the rabbi what time the prayer would begin. It was to be an emotional first time reciting the sacred words in her mother’s memory, and Lori’s daughter had specially come down from Los Angeles to be with her mother.

“I told her Yizkor was at 11:30,” recalls Goldstein. “I turn around to the banquet hall to wash my hands in preparation [for the haftorah], then I heard the very first shot. I … turned around to try to see what’s going on, and I locked eyes with this terrorist … standing there, he was in position with a rifle [and] turned [it] on me … ”

Things happened quickly after that. Goldstein lifted his hands to protect his face from the gunman’s bullets, losing one finger and badly injuring another one. A second man, Almog Peretz, a guest from Israel, was injured as he and the rabbi ushered children in the area to safety, including Peretz’s 8-year-old niece, Noya Dahan, who was also wounded. Two congregants, one a Marine corps veteran and the second an off-duty Border Patrol agent, charged at the gunman, who fled.

“I went back into the lobby, and I saw Lori laying on the floor,” says an emotional Goldstein, who had grabbed a tallit and wrapped it around his badly injured hands to stem the flow of blood. “Her dear husband Dr. Howard, who is a Kohen and came to shul to do our birkat kohanim [priestly blessing] fainted and was laying next to … Lori. It was a horrific sight … ”

Lampert was inside the sanctuary during the shooting and ran out to be at her injured friend’s side.

“Lori was always there for everyone, crying with them or celebrating with them, in good times and bad,” she says.

Lampert held Kaye’s hand as someone performed CPR, talking to her throughout and hoping she would respond.

“I take comfort knowing I was with my friend until the end,” whispers a choked-up Lampert.

“G‑d should comfort and console Howard, Hershel Nochum ben Yitzchak HaKohen, and their daughter Chana Yehudis [Hannah] … ,” says Goldstein. “Her [soul] should rest in peace in [heaven], and they should be reunited with the coming of Moshiach speedily in our days.”

Reflecting on the state of his shaken community, Goldstein acknowledges that while they are shaken and scared, they take stock in knowing that, united with the entirety of the Jewish community, they are not alone.

It’s a theme, says Lampert, that Kaye echoed throughout her life, always stressing the importance of doing acts of kindness for others, even—or especially—for strangers, and teaching the next generation to be proud of their Jewish heritage.

“She believed in teaching our children how proud we need to be and continue our legacy,” she says. “Lori was a proud woman, and she showed that to the entire world.”

Lori Kay is survived by her husband, Dr. Howard Kaye, and their daughter, Hannah.

The funeral will take place on Monday, April 29. There will be a chapel Service at Chabad of Poway, 16934 Chabad Way, Poway, Calif. The levaya-funeral service will be held at El Camino Memorial, 5600 Carrol Canyon Road in San Diego.