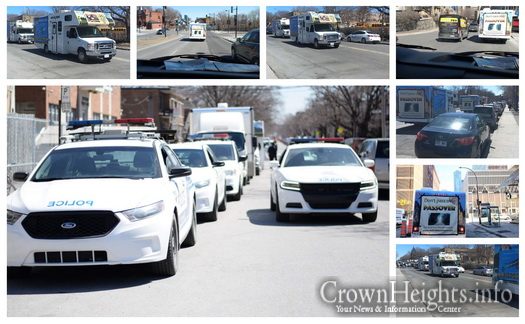 For the first time, Mitzvah Tanks paraded through the streets of Montreal in honor of the Rebbe’s birthday.

A team effort of locals, bochurim and Anash brought together created this amazing Yud Aleph Nissan Tank Parade. Four Mitzvah Tank,s a video truck, and horses paraded through the streets of Montreal this past Wednesday, marking the Rebbe’s birthday.

Members of the Jewish community in Montreal helped sponsor the parade, with the goal to inspire as many Jews as possible to do a Mitzvah and attend a Pesach Seder. The ‘tanks’ were armed with dozens of bochurim who set out with Matzos, Tefillin, and Shabbos candles and gave them out to hundreds of unaffiliated Jews.

A special thank you was given to the Tankistim Rabbi Yitzchok Lebovics, Rabbi Kreiman, Rabbi Slapuchnik, Rabbi Zurbah and Rabbi Shingarten.