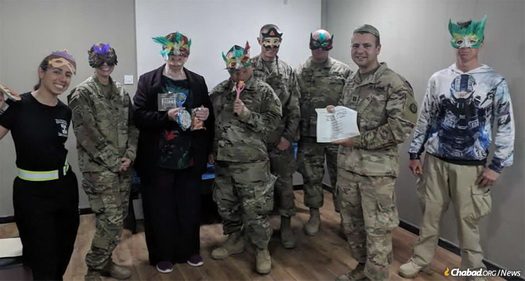 Capt. Sanford Cohen counts down the end of his deployment in Kuwait by the number of Shabbats, rather than days.

“It’s a lot more manageable,” said Cohen, 38, from Staten Island, N.Y. “I’m going to quote one of my … soldiers on this: The Friday-night service is what he looks forward to in his week. It completes his week. It pains him when he can’t make it. It pains him.”

There is not a single Jewish chaplain at Camp Buehring Army Base—let alone in all of Kuwait—but despite this, Cohen’s religious observance has remained at the forefront of his priorities, so much so that he has become a volunteer lay leader endorsed by the Jewish Welfare Board.

“When you don’t know if the bullet that’s being fired has your name on it, the ability to do more mitzvot … takes precedence over other projects,” said Cohen.

Counting down by Shabbats is easier for his three sons—ages 3, 6 and 9—to grasp, too. While they only have a chance to speak to him on Sundays due to the time change and differing schedules, they always tell him what they did over Shabbat.

“It’s something they get,” said Cohen. “I’ll take an article from Chabad.org or Aish [on the week’s parsha], and send it to my oldest son … with, ‘hey, I thought you’d like this … .’ He reads it, and they discuss it on Friday night.”

And for Cohen, a Brigade Ammunition Officer of the 35th Combat Aviation Brigade, the end of Passover marks his 40th (and last) Shabbat of his nine-month deployment. But for now, he is busy preparing for and organizing Passover on base, expecting about 20 people to attend the Seders.

As a lay leader, Cohen orders kosher MREs (shelf-stable Meals Ready to Eat), leads Friday-night services and organizes holiday celebrations for his fellow troops. Their Passover supplies would not be the same without the support of Jewish organizations such as the Aleph Institute, which provide items that cannot be ordered through the military.

“The only way to have a connection is through organizations like Aleph Institute and Kosher Troops. They are what keeps us connected [when] there is no synagogue, there is no kosher restaurant,” said Cohen.

The Aleph Institute sends religious materials throughout the year—Torah scrolls, menorahs, hamantashen, military camouflage siddurim (prayer books) and other Jewish books. For Passover, they send whatever is needed to complete a seder meal, such as Haggadahs, seder plates, charoset and shmurah matzah, benefiting approximately 1,000 soldiers on about 60 bases worldwide.

“This campaign was started by the Rebbe [Rabbi Menachem M. Schneerson, of righteous memory] in 1941 or ‘42, and he oversaw it personally,” said Rabbi Menachem Katz, director of military and prison outreach at the Aleph Institute. “It’s something that goes back hundreds of years—back to every Lubavitcher Rebbe in Russia, where they took care of the Russian Jewish soldiers in the Russian Army and made sure they had matzah for Pesach and so on.”

The Aleph Institute also helps connect Jewish troops with the visiting Jewish chaplain so that more Jews are able to participate in holiday celebrations and religious observations, according to Capt. Mendy Stern, chaplain for the 312th Military Intelligence Battalion.

Stern, stationed at Fort Sam in Houston, is preparing for deployment to serve as the rabbi for troops in Afghanistan during Passover. This will be his second Passover deployment and his sixth deployment overall.

“This opportunity to serve those who serve our great country is an absolute honor and privilege,” wrote Stern over email. “Since joining the Army, I’ve encountered many Jewish troops whose lives were touched by the mere presence of a Jewish chaplain or the opportunity to observe a mitzvah in an otherwise Jewish religious desert.”

His Passover preparations are complicated, to say the least. Usually, chaplains on the ground, who are usually not Jewish, request kosher-for-Passover MREs (Meals Ready to Eat) and “Seder Kits,” which provide the basic items, according to Stern. Everything must be arranged and shipped far in advance, and, traditionally, more people than expected tend to show up. During his previous Passover deployment, more than 60 Jews attended the Seders.

“As there are so few Jewish chaplains, we must rely heavily on the chaplains on the ground to advertise and help spread the word of the upcoming services,” wrote Stern. “We rotate for holiday coverage to locations where there is no Jewish chaplain. … We arrive a few days before Pesach, and we set up the Seder, while still visiting the troops, providing counsel and [offering] support to the mission.”

The lack of Jewish chaplains is a real issue for Cohen, who wishes that more rabbis would bring their religious outreach to the U.S. military. He became a lay leader after traveling two-and-a-half hours to Camp Arifjan last Fall for Rosh Hashanah—the closest location for prayer services—forcing him to miss several days of work at his own base. There are “dozens” of chaplains at Camp Buehring, but no rabbis.

“There aren’t enough rabbis as chaplains in the military, so guys like me have to step up,” said Cohen. “This is the place—the Army, the military—to do the most good, the most Kiddush Hashem, not just for the Jews but the non-Jews.”

Even though there are about 5,000 Jewish-affiliating soldiers in the military, Katz estimates, there are only 12 active-duty Jewish chaplains in the Army, and less than 50 in the entire military. Where there isn’t a rabbi, lay leaders like Cohen fill the role as best they can. But both Stern and Cohen agree: It may be more complicated than a holiday at home, but it’s a shlichus that is well worth it.

“On one hand, there’s a bittersweet feeling of being away from family during the holiday, having to imagine the children asking the ‘Mah Nishtanah’ [‘Four Questions’] and celebrating thousands of miles away from home. On the other hand, the feeling that I’m embarking on a shlichus [emissary] mission, to celebrate Passover with servicemen and women who are far from home … it’s an adventure which I wouldn’t pass up.”