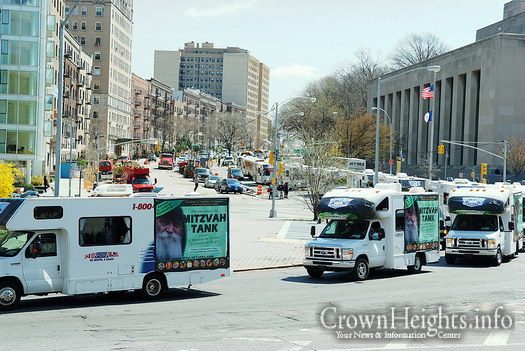 Boys are encouraged to join the grand Mitzvah tank parade which will drive through NYC in honor of the Rebbe’s 117th birthday on the 11th of Nissan.

As Chassidim, we present our Rebbe with many gifts. One which stands out is the Mitzva Tank Parade, which conquers NYC by spreading the mitzvos of pesach to all on the Rebbe’s birthday each year.

This year being the Rebbe’s 117th birthday, there is being a special effort on getting as many boys as possible to join in the parade.

Aside from putting on Teffilin with thousands, and distributing hundreds of pounds of Matza, the Mitzva Tanks Parade brings across the Rebbe’s message to all New Yorker’s.

The parade will be leaving this coming Tuesday, Yud Alef Nissan April 16th, from Kingston Ave and President St. It will pass the Tzivos Hashem rally in front of 770 after the Rebbe’s Minyan at 10:30am SHARP.

Thanks to a group of dedicated Bochurim, there will be a special emphasis on increasing the number of participants on each tank. The organizers therefore urge all families to send their children on Mivtzoim in honor of the Rebbe’s birthday.

* Those who sign up by Sunday will be able to request with whom they wish to be with (up to 5 ‘Tankisten’).

The MTO would like to thank the NYPD, and the 71st pct. for making this year’s parade possible.

The organizers hope that this parade will end this Golus and March towards the Geulah Ha’amitis V’hashleima, with the Rebbe leading the way!