« Our Story: I Can Only Write, They Will Have To Do It
Wedding: Yitzy Oster (Crown Heights) and Chaya Simpson (CrownHeights) » 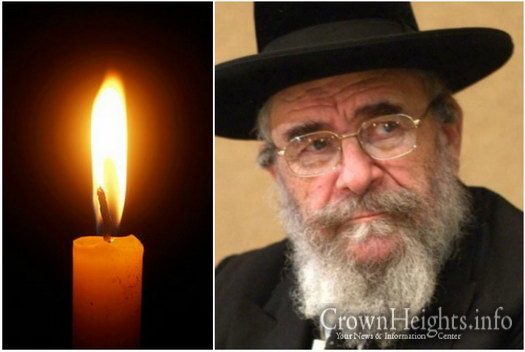 With great sadness, we notify you of the passing of the the Av Beis Din of Bnei Brak Harav Moshe Yehuda Leib Landau OBM, one of the most respected Chabad Rabbonim of our time, passed away on Motzei Shabbos, the 24th of Adar II. He was 83 years old.

Harav Moshe Yehuda Leib Landau was born in Israel to Mrs. Chaya Mina and Rabbi Yaakov Landau, a Lubavitcher chossid who was nicknamed “the courtyard rabbi” by the fifth Chabad Rebbe, Rashab in Rostov, Russia.

A year after he was born, the family moved to Bnei Brak, a city in central Israel known for its mostly frum population. It is the fifth most densely populated city in the world. Rabbi Yaakov Landau served as its chief rabbi.

Following his marriage, Rabbi Landau served as a Maggid Shiur in the Central Tomchei Tmimim Yeshiva in Kfar Chabad, a position he held for 23 years. He also assisted his father in rabbinics and kashrus.

Upon his father’s passing, the Chassidic Mayor of Bnei Brak Moshe Oirenstein announced that in accordance with Rabbi Yaakov Landau’s will, he is appointing his son Rabbi Moshe as the new Chief Rabbi of Bnei Brak.

The announcement was met with fierce opposition from Litvish rabbis because of Rabbi Landau being a Chabad chossid. They proposed the posek Rabbi Shmuel Wosner instead. Rabbi Wosner himself publicly accepted Rabbi Landau’s as the successor.

When he had doubts about the difficulty of his position, the Rebbe commented to him, “It has already been decided in the Heavenly Court that you will be a Rov of a large and known city, and you have doubts?”

Rabbi Landau went on to be recognized as chief Rabbi by the Bnei Brak municipality, while Yemenite Rabbi Shlomo Korach was appointed to the same role by on behalf of the state.

Despite reconciliation efforts by Rabbi Nissim Karelitz, chairman of the Beis Din Tzedek of Bnei Brak, Litvish rabbis and their followers ran a decades-long ban on Rabbi Landau, refusing to recognize his role or his kosher certification.

Nevertheless, Rabbi Landau went on to become one of the most respected rabbis and halachic authorities in Israel and was renowned for his kosher certification, one of the most reliable and trusted kashrus agencies in the world.

Rabbi Landau continued his father’s custom not to charge food manufacturers and restaurants for providing them supervision to maintain the impartially of his and his mashgichim’s decisions.

He is also survived by his brother Rabbi Eliyahu Landa, a Rosh Yeshiva at the Central Tomchei Tmimim Yeshiva in Kfar Chabad, Israel.

« Our Story: I Can Only Write, They Will Have To Do It
Wedding: Yitzy Oster (Crown Heights) and Chaya Simpson (CrownHeights) »