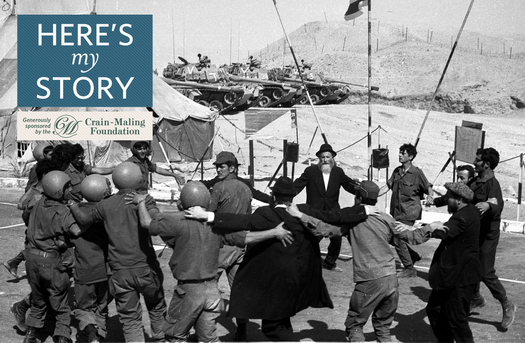 When I was a young man, I was dispatched by the Rebbe to Israel, along with a group of other yeshivah students from New York. We were to study during the day at the Tzemach Tzedek Chabad synagogue in the Old City of Jerusalem and, during the evenings, at Yeshivas Toras Emes in Shikun Chabad in central Jerusalem. And we were also to do outreach work in various locations in Israel.

Before we left for Israel in the spring of 1976, the Rebbe repeatedly spoke about our mission and even said that he was taking personal responsibility for our welfare.

So we set off with great excitement, particularly because we would be in Israel for Purim, and we would get to distribute holiday food packages, mishloach manot, to the soldiers on army bases. We had heard the Rebbe speak many times about the merit of the soldiers who defend the Holy Land with their lives, and therefore we waited impatiently for this opportunity to bring them joy. The packages to the soldiers were from the Rebbe himself – that is, they were funded by him personally – so it was a special honor to deliver them.

When Purim came, I was dispatched with three other chasidim from Israel in the back of a military vehicle to an IDF base near the Arab city of Nablus, known to Jews as Shechem. We were about two kilometers from our destination when suddenly the car stopped. We didn’t understand what was going on because we couldn’t see from the back of the vehicle; we just heard yelling. After a few minutes, the driver came around to tell us that we couldn’t go forward because about twenty meters up ahead was a blockade of stones and burning tires. Also, up on the hill, over a hundred Arab youths were gathering armed with stones, which they started to hurl at us though they were too far away to cause any harm.

The driver would not take responsibility for bringing us across the blockade and putting us in danger. But I tried to convince him that we had no choice; we had to move forward because we were on a mission from the Rebbe.

“It’s too big a risk,” the driver insisted, “anything could happen if the Arabs riot.”

I was not very fluent in Hebrew then, so to make my point clear, I got out of the car and announced, “I’m staying. You can go back, but I’m going ahead regardless.”

“Do you understand what’s going on here?” the driver retorted. “They will attack you!”

“Before we left America, the Rebbe assured everyone in my group that he was taking personal responsibility for our welfare,” I said, “so I know that I have nothing to fear, and I’m going ahead.”

“That might be well and good for you chasidim,” he responded, “but I am a soldier, and the Rebbe never guaranteed my welfare.”

“I am sure that his guarantee extends to you also since we are all part of one group.”

“You have that much confidence in your Rebbe?” he asked.

I was overjoyed that I managed to persuade him. It was dangerous, I knew that, although it was not as dangerous back then as it became later during the Intifadas. He hit the gas and sped towards the blockade. It was made up of a heap of stones, but the military vehicle was able to climb over it though it swayed from side to side, tossing us around.

After we got over the blockade, the Arab youths were near enough to hit the car with stones. In fact, they managed to throw one stone into the car, but thank G-d, it didn’t hurt anyone. The soldiers shot into the air but that didn’t intimidate them or stop them. Nonetheless, we managed to get through safely and drive on.

When we reached the IDF base, the commander was standing at the gate, and I heard him ask the driver, “How did you have the guts to go through that road block?”

The driver pointed at me and said, “It’s his fault!” And then he related the whole story.

After hearing it, the commander said to me, “I want to gather all the soldiers together so they can hear this as well.”

There were about 300 soldiers on this base, and I told them how the Rebbe gave me the courage to move forward and not turn back. They responded with great excitement, and we all danced together, and then we distributed the Purim food packages from the Rebbe.

When I returned to Jerusalem, I reported what had happened to Rabbi Binyamin Klein, the Rebbe’s secretary. He was very interested in my story and asked for all the details.

Then at 4:00 a.m. Israel time, we tuned in via a live telephone hook-up to the Rebbe’s Purim farbrengen which was then taking place in New York. As I listened, I heard the Rebbe say at one point:

Every once in a while, an extraordinary event reminds us that we should not be afraid of the darkness of exile … This is so in the life of every individual. Everyone can find miracles in their private life, which are also lessons for the future. I would like to relate something that just happened, which shows us that when a Jew adheres to Judaism, he has nothing to fear, and he will succeed.

The Rebbe went on to give a detailed account of what happened to us, emphasizing that no one in our group, nor even among those throwing stones at us, was injured. He concluded:

These Arabs saw that a Jew, who resides in the Holy Land, wishes to follow what our holy Torah instructs him. He doesn’t want to fight with them but when Purim comes … it is clear that festivities must take place in Shechem, and it is clear that nobody can stop this. And not only will it bring no harm, but it will be done peacefully and have only positive results.

I must say that hearing the Rebbe praise something that happened with me personally was very humbling, and I thought to myself, “If only I would always be able to fulfill what the Rebbe asks of me and always make him proud.”

Rabbi Yosef Yitzchak Gurewitz serves as the spiritual mentor of Yeshivas Tomchei Temimim in Migdal HaEmek, Israel. He was interviewed in November of 2014.