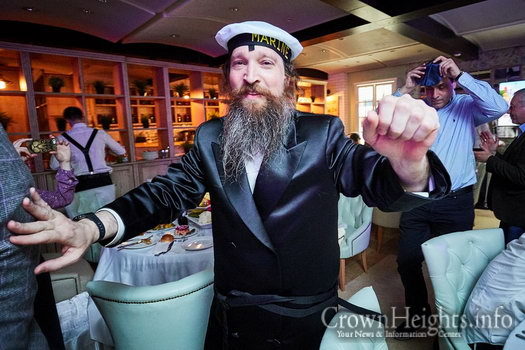 The Frierdiker Rebbe advised Reb Chatsha (Yechezkel) Himmelsthein to become a Rov in a certain town/city. Reb Chatsha known for his humility replied, “I am unworthy of becoming a Rov as there are certain halachos (laws) in Choshen Mishpat (monetary matters), that I am not a hundred percent clear in them.”

The Frierdiker responded by telling him the following story.

It was a purim day and as in many towns and villages someone drank more wine or mashke than he should have and fell asleep on a bench. Some of the children saw him in his deep slumber and wanted to have some fun.

So they obtained the clothing of a gallach (a priest), (being it was on Purim, so it was a costume, when many people dress up) and put it on him. Sometime later, when this person woke up, he was still somewhat intoxicated, and saw that he was wearing the garb of a priest. Looking at himself, he said this is not possible, I am not a priest. I am a Jew.

However, being that his mind was still foggy he then said, “But I am wearing the garments of a priest, that means I must be a priest.” Unable to come to a conclusive clarity, he decided he would make a test to see if he is a gallach or not.

However, a moment later he rebuffed that proof, if I am not a priest, why am I wearing priestly garments?! The only ones who wear these vestments are gallachim (priests). He concluded, I am a priest, and most probably the majority of priests also cannot read it. After all, I am not a kayliche (crippled etc.) and if they can be a priest even if they can’t read this, I too can be a priest.

The Frierdiker Rebbe concluded, ‘A moral that is to be learned from this is, ‘Don’t think that others are more endowed with wisdom than you. Everyone has their deficiencies; just those who succeed do not allow the deficiencies to hamper them on their path of success.

When I repeated this story to others, some of them informed me that they heard that the Frierdiker Rebbe’s message was much more than that, as well as there being a second message.

The Frierdiker Rebbe was telling him, when you are given a responsibility or task to accomplish, it is common for one’s “humility” to claim, I am incapable of accomplishing that. So the message is, look at those who accomplished things, do you think initially they all had the talents to succeed? No they didn’t, but they persevered and succeeded anyways. So too, even if it is true that you are missing clarity in certain halachos, with the time and perseverance, you will gain that knowledge.

The second point is; Your clothes or position may influence your behavior. However, at the same time one should realize, the garments on their own don’t make you into that person. The Frierdiker Rebbe wanted him to become a Rov, and by accepting that position does not fill in the void that he felt he was lacking in. He would have to toil to grow into that position.

Rabbi Avtzon is a veteran mechanech and the author of numerous books on the Rebbeim and their chassidim. His newest book Farbreng With Reb Binyomin Kletzker, (vol. 6 in the Early Chassidic Personalities Series), is now available in Crown Heights seforim stores and on line. He is available to farbreng in your community and can be reached at avtzonbooks@gmail.com