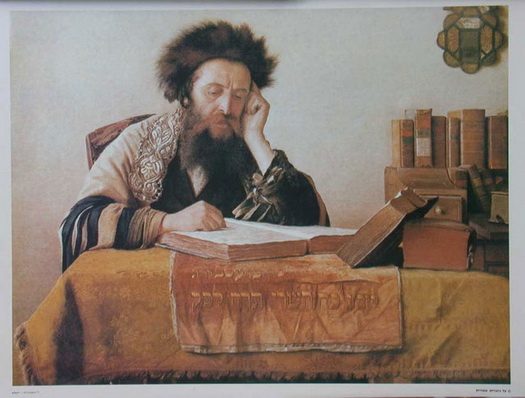 Being that this past week (the 21st of Adar), was the yahrzeit of the tzaddik Reb Elimelech of Lizhensk (if you commemorate it in both months of Adar), I chose to post a story about him and his greatness.

Reb Zushe and his brother Reb Elimelech often traveled together, and quite often Reb Zushe would be dressed like a simple Jew, while Reb Elimelech dressed like a tzaddik. One of their main objectives was to arouse Jews to do Teshuvah. However, they were extremely careful not to embarrass another Jew and inform him that through their ruach hakodesh they sensed that he sinned and should repent.

Rather, Reb Zushe would make believe that he just realized that he personally did that particular sin, and would bemoan to himself about how terrible it is for a Jew to have done that. A few minutes later, he would go to the tzaddik, Reb Elimelech, and with tears in his eyes he would beg him to help him do teshuvah.

He would speak loud enough that the person he was interested in inspiring and arousing in him the feelings of regret and teshuva would overhear their discussion and say to himself, “I also have that shortcoming.” He would then listen with great interest to what the tzaddik would say to this person.

Hearing Reb Elimelech’s words of encouragement, that Hashem is ready and willing to forgive one who sincerely repents, made the person think, maybe I too should repent. However, he was hesitant to say anything, fearing that the path of repentance would be too difficult for him.

But as he heard how the tzaddik who also spoke loud enough for him to hear, showed this “sinner” how to repent and correct his misdeeds, he thought, that isn’t too harsh or difficult; I also could and should repent. He would then come to the tzaddik and confess his sins.

The following is one of those wondrous stories:

At one inn, Reb Zushe began moaning and said to Reb Elimelech, Oy vey, my tefillin are possul. I always thought that my father of blessed memory bought me a beautiful pair of tefillin, that would last for a lifetime, so I never checked them. Today I met a sofer (scribe) who offered to check them for me, so I gave them to him.

But when the sofer opened the boxes up in front of me, I was horrified, the boxes were completely empty, and there was nothing inside. That means, I didn’t put on tefillin my entire life and all these years when I said a blessing on them, I mentioned Hashem’s holy name in vain. Rebbe, help me! How can I correct this? Just imagine a Jew who is over fifty years old, and he never put on tefillin.I feel terrible! How many brochos livatalah (blessings said in vain), did I say? Oy Rebbe save me! And with that Reb Zushe broke in a deep cry.

Reb Elimelech spoke soothingly to him and he began calming down. He then said to him, I happen to be a sofer myself, and I will write for you a pair of tefillin tonight, that you can put them on tomorrow morning.

Hearing this conversation, the innkeeper rushed over to Reb Elimelech and said, Rebbe, I never knew that one has to check his tefillin. So it is close to fifty years that my tefillin weren’t checked. Can you please check mine?

Yes, of course replied Reb Elimelech.  It would be my honor to check a Jew’s tefillin. Please bring them over to me now.

The innkeeper thanked him and hurriedly left to bring his tefillin. A few moments later he handed them over and watched with amazement as Reb Elimelech opened them up.

However, a moment later his expression turned to horror; as Reb Elimelech showed him that the first box was completely empty and then the second one was also empty.

Recalling the conversation he just happened to overhear, he said; “Rebbe does that mean that I never put on Tefillin my entire life? He then broke out in a painful cry.

Reb Elimelech explained to him the seriousness of the transgression, but added in a comforting tone, “being that it wasn’t intentional and you are sincere in your repentance, the gates of repentance are open for you.”

He then said, “I will write for you a new pair of tefillin. I will have in mind to correct and make up for all the days and years that you unintentionally missed.  Additionally as part of your repentance you should do the following.” He then instructed him what he has to do.

The innkeeper was so thankful and relieved. He promised to do everything the tzaddik would instruct him to do.

Reb Elimelech took out some parchment, ink and a feather quill and wrote a pair of tefillin that very night. To the sheer happiness of the innkeeper they were ready the following morning, and after seeing Reb Elimelech inserting them and sewing up the boxes, he joyfully put them on.

Mission accomplished, Reb Zushe and Reb Elimelch continued on their travels to help another Jew.

A short while later the innkeeper passed away. Being that the family was poor and couldn’t pay the chevra kadisha (burial society) for all the expenses, the custom of that town was that the chevra kadisha would take the person’s tefillin and would try to sell it.

Not knowing that these tefillin were written by the tzaddik, Reb Elimelech they placed it together with all the pairs they had accumalated.

Some years passed and the tzaddik Reb Levi Yitzchok of Berditchov came to that town. In the morning he noticed that the student who was responsible to bring his tallis and tefillin forgot to do so. This distressed him greatly. What was he going to put on that morning?

While all of his students were more than willing to have the honor that the tzaddik uses their tefillin, Reb Levi Yitzchok did not wish to borrow someone’s pair. He desired to use a pair that was his.

One of the students mentioned the fact that in many communities the Chevra Kadisha have the tefillin of the departed for sale, as payment for their services. He suggested that they inquire by the chevra kadisha if they have a pair for sale.

When the chevra kadisha replied in the affirmative, and informed them that they have a few pairs; Reb Levi Yitzchok said he would like to personally go and choose (pick out) the pair he desires.

When Reb Levi Yitzchok arrived, the gabbai of the chevra kadisha showed him quite a few pairs of tefillin, and informed him that they are all available for the same price.

To everyone’s surprise and astonishment, Reb Levi Yitzchok began respectfully moving a few pairs to the side and then picked up one with tremendous happiness. “I will take this one,” he exclaimed.

The gabbai realized that there must be something unique and significant about that particular pair of tefillin and wished to understand whatit was. So he said; “Honored Rabbi, our custom is to sell all of them at the same fair price.  However, obviously this pair is extra special and therefore can be sold at a higher price. All I have to say is that the tzaddik of Berditchov chose and desired it and people would gladly pay us a higher price. However, I will give it to you if you explain to me why you chose this one specifically.

Reb Levi Yitzchok then related the above story, exclaiming now you understand.