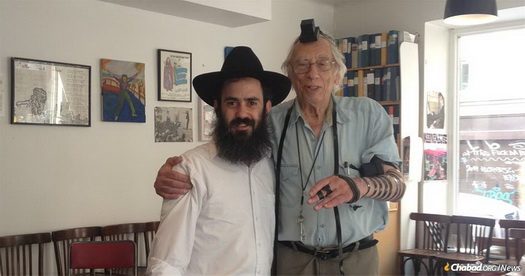 When Izzy Young, the tireless folk-music impresario, passed away on Feb. 4 in Stockholm at the age of 90, the media took note of a storied career in the history in creating the modern folk-music movement. Missing from the details about this self-described “Jewish boy from the Bronx” is the backstory behind his friendship with Chabad-Lubavitch emissary, Rabbi Chaim Greisman.

For a period in 1950s and 1960s, Israel Goodman “Izzy” Young was the man at the center of a musical revolution. Remembered as a sardonic man in heavy horn-rimmed glasses with his tie perpetually askew, recognized by a booming voice with a thick outer-borough accent that Bob Dylan once said was “like a bulldozer,” Young helped shape the names and voices of the Beatnik movement. While he may not have been a household name, the names of the regulars at the Folklore Center, his cluttered music shop-cum-beatnik-meeting-town-hall in the heart of Greenwich Village, such as Pete Seeger, Allen Ginsberg, Phil Ochs, and most notably, Bob Dylan, certainly are.

In November 1961, Young helped Dylan put on his first major concert at Carnegie Hall a few months after the musician’s arrival in New York City.

In 1973, Young decamped for Stockholm after becoming transfixed with traditional Swedish fiddle music. There, he opened Folklore Centrum.

It was in Stockholm that Young—the son of Jewish immigrants from Poland—met the Greismans, shortly after the couple moved to the Swedish capital in 2001.

“I was outside of the Adat Israel synagogue,” Greisman recalls, “and an Israeli I knew walked by and told me, ‘If you’re looking for customers, Izzy is a good one.’ ”

The Centrum was a short walk from the synagogue, and though Young had previously visited on other occasions, through his friendship with Greisman, he became the “Minyan Man.”

In addition to helping complete the prayer quorum in the synagogue, Young would regularly perform mitzvot with the rabbi and his children. He would also regale the Shabbat and holiday guests of the rabbi with stories from his youth in New York.

“He always had time for another mitzvah,” recalls Greisman. “It didn’t matter if it was tefillin every Friday, lulav and etrog on Sukkot, or shofar on Rosh Hashanah, when we came, Izzy would put everything aside to do something Jewish.”

And for days after a visit, the animated Young would share his excitement with others.

“Whenever I’d thank him for helping us,” says Greisman, “he wouldn’t hear of it.”

“It gives me so much joy,” the rabbi recalls Young saying. “What do you need to thank me for?”