« How do your kids feel about school?
Shocking Footage of UPS Driver Disregarding Ambulance in Boro Park » 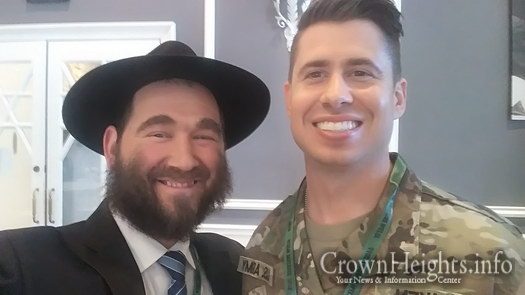 Last week chaplains from around the world gathered for Aleph Institute’s 12th Annual Shabbat with Our Troops, a training course for Jewish chaplains held at the Shul in Bal Harbor, Florida.

Addressing the sea of men and women in uniform, JNet director Rabbi Yehuda Dukes shared advice and resources with the chaplains and lay leaders who wish to help the Jewish Service members under their care learn Torah and strengthen their Jewish knowledge and connection.

The crowd of more than 75 men and women, representing all sectors of the U.S. military, learned about the offerings of JNet, which pairs people up for weekly sessions of over-the-phone Torah study. While many members of the military have already been studying with JNet, this was the first time that JNet officially presented its offerings at an Aleph conference.

Speaking at the conference, Dukes explained that JNet can arrange study partners for the chaplains as well, citing the example of Capt. Moshe Lans, who has been learning and teaching on JNet for several years.

Lans was raised in a home affiliated with Conservative Judaism but was sent to preschool at Yeshivas Achei Tmimim in Worcester, MA, led by Rabbi Hershel Fogelman a”h. Capt. Lans is now an ordained Orthodox Rabbi, and when he was deployed to Iraq from 2005 to 2006 he served as a Jewish lay leader. While on active duty some time later, a friend sent him an email about one of JNet’s online classes. Intrigued about the opportunity to learn on the phone, he signed up. Since then, he has learned Tanya with Levy Schrager of Morristown, NJ every week. As a volunteer teacher, he also learns Hebrew reading and prayers with Charles Lunenfeld of Belmore, NY.

Requests for study partners were made right there at the conference, including one from a Jewish chaplain who grew up with a Reform background and wished to learn more about Yiddishkeit to be able to serve the more traditional Jews under his care.

“Our chaplains are always happy to provide their troops with more services,” says Rabbi Aaron Lipskar, Executive Director of Aleph. “JNet is a wonderful resource, which we are sure will be utilized by many more military personnel as a result of this partnership.”

“No Jew is too far to be touched by Torah,” says Dukes, “and this partnership represents another step in spreading Torah even farther.”

Sign up to learn or teach on JNet here.

JNet is a project of Merkos Suite 302.

« How do your kids feel about school?
Shocking Footage of UPS Driver Disregarding Ambulance in Boro Park »