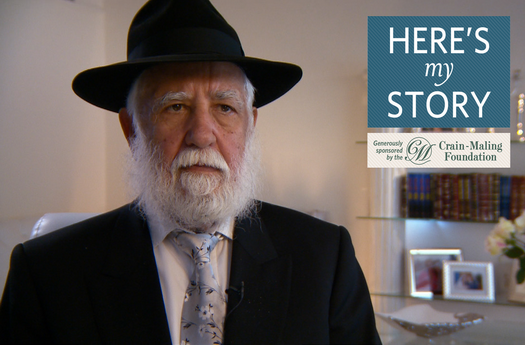 I was born in Morocco in 1936. When I was eleven, I set out by horse-drawn cart to Casablanca, where I studied in the Chabad yeshivah for two years. But I wasn’t happy; I was looking for something more rigorous. I learned that the Rebbe’s first emissary to Morocco, Rabbi Michoel Lipsker, had come to Meknes and opened another yeshivah there. In Meknes, I found what I had been looking for – a more intensive program of studying Talmud and chasidic teachings.

Rabbi Lipsker also taught me (and all his students) how to bring Jews closer to G-d through love.

One day representatives of the Jewish Agency for Israel came to the yeshivah. Rabbi Lipsker started a conversation with them in which questions of faith came up. Rabbi Baruch Toledano, the chief rabbi of Meknes and one of the greatest rabbis in Morocco, was also present when they came. And when he heard how these Jews were speaking about Judaism, he put his hands over his ears in shock, declaring, “These are words of heresy!”

Rabbi Lipsker countered, “Rabbi Baruch, why are you so upset? These people are like children who were stolen from their own people – they weren’t educated and they don’t know.”

Rabbi Lipsker continued to speak with them for another hour, and then they agreed to put on tefillin and to recite the afternoon prayers. When Rabbi Baruch saw this, he praised Rabbi Lipsker to the skies. Rabbi Lipsker responded, “The essence of every Jew is pure – you just have to know how to find the right path to his heart.”

In 1952, after two years of studying at the yeshivah in Meknes, I moved on to study in the Tomchei Temimim yeshivah in Brunoy, France. This yeshivah was founded after World War Two with the arrival of many Chabad refugees from Russia. In addition to delving into advanced chasidic texts, every Sunday we would travel to Paris to teach Jewish children there. These children studied in secular public schools all over Paris, but on Sundays, Rabbi Hillel Azimov, the Rebbe’s emissary in the city, would gather them together, and the yeshivah students would learn with them.

One year, as part of the celebration of Lag B’Omer, we rented busses and brought about two hundred of these Sephardi children to spend a whole day in the yeshivah in Brunoy. The children prayed with us, ate with us and soaked up the spirit of the yeshivah.

The director of the yeshivah, Rabbi Nissan Nemanov, reported to the Rebbe about this event, and he shared with me the Rebbe’s response. As I recall, the Rebbe implied that he received so much bad news – certainly, people wrote to him constantly about problems with family, health or with livelihood – that he craved good news. And he chastised Rabbi Nissan for waiting one week before writing to him by saying, “It is a shame that you delayed so much when you have good news…”

When Rabbi Nissan finished reading the Rebbe’s letter to me, he said: “One day you will be the Rebbe’s emissary, and you will need to notify him about various events. Don’t make my mistake. When you have something good to report, you must write immediately and let the Rebbe know.”

I didn’t take his instruction sufficiently to heart. There came a time, when I was the Rebbe’s emissary in Milan, that I assembled a special album about my Torah programs in five different places within the Sephardi community. I wrote down the names of all the children – 193 in all – along with their mother’s names, teacher’s names and courses of study. When I presented this album to the Rebbe, he looked at it for a long while, reading every single name. As he was reading, I stole a glance at the Rebbe’s face and saw pure joy shining from his face. When he finished, he asked me, “What am I guilty of that I didn’t know about any of this until today?”

I tried to correct my error and send a monthly report to the Rebbe about my activities, but sometimes it happened that I delayed. I then got a letter from the Rebbe: “Your letter was received after a long break … and if your excuse is that you didn’t write because there wasn’t anything to write about, then that should suggest to you that … you have to work to have something to write about.”

But I am getting ahead of my story.

After seven years of studying in the yeshivah in Brunoy, I came to study in New York. In those days, each yeshivah student would have a private audience with the Rebbe on their birthday. But, in Morocco nobody attributed any importance to birthdays, so I didn’t even know my exact date of birth – I only knew that it was somewhere around Purim; nonetheless I took advantage of the opportunity to see the Rebbe.

As soon as I entered his office, the Rebbe asked me on what day I was born. I didn’t know how to answer, so the Rebbe said to me, “Since you don’t know, and being that Shabbat is holier than the other days of the week, let’s set this Shabbat as your birthday. Study extra Torah as is customary on a birthday, and regarding the custom of giving extra charity, you should give on Friday before the onset of Shabbat.” And then the Rebbe blessed me with success in my Torah studies.

Afterwards, I wrote home, asking my parents to tell me the exact date of my birth. It turned out that, indeed, that Shabbat was my birthday!

After a few more years of study in the Chabad yeshivah, I was sent as the Rebbe’s emissary to serve as the rabbi of the Sephardic community of Milan. The Rebbe chose me for this position because I hadn’t abandoned the Sephardic customs of my Moroccan family. The fact that this was so had a lot to do with the Rebbe’s instructions to Rabbi Lipsker, many years earlier, not to try to alter the customs of Moroccan Jews but just to teach them Torah.

While in Milan, I became engaged to marry, and a man by the name of Mr. Carlo Zippel, a supporter of Chabad causes, mentioned this in his audience with the Rebbe, who responded, “He has informed me that he’s getting married soon – that I don’t need you to tell me. But I do need you to tell me whether he will be able to cover the expenses of the wedding or not.”

When Mr. Zippel returned to Milan, he asked me to come by his office and handed me an envelope containing a substantial sum of money. And then he told me what the Rebbe had said. I understood – the Rebbe took care of all the details pertaining to his chasidim, like a real father.

Rabbi Yeshua Hadad (1936-2017) served as a community rabbi in Milan for over fifty years. He was interviewed in Jerusalem in August of 2012.