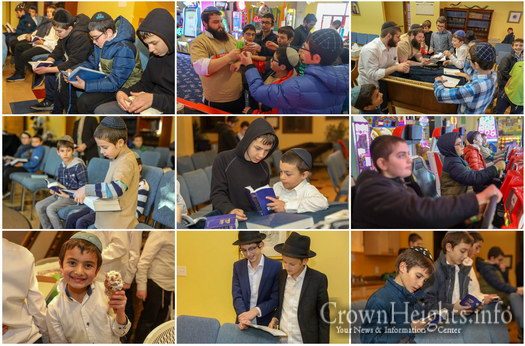 An exciting shabbaton in Longmont, Colorado full of fun activities, chayus, and inspiration for young shluchim kicked off MyShliach’s 5779 regional shabbaton season. The shabbatons bring together young shluchim (and for the girls’ shabbatons, young shluchos) from various regions around the world for three days of rejuvenation and companionship with likeminded peers living within a given radius.  This first shabbaton had 16 boys from the states of Utah, New Mexico, and Colorado.  An additional five shabbatons are planned for the next few months, in Southern California, the Pacific South West, Middle America, Central Canada, and Florida.
MyShliach regional shabbatons only get better. Every year, the programs are upgraded, the trips and activities are more exciting, and the inspiration is more impactful. This year though, saw the first of many shabbatons taken to a whole new level. In effect, the shabbaton began weeks before, when a hachanah competition was launched in which boys could earn points that they could redeem for prizes at the end of the shabbaton. The points the boys earned were loaded onto “credit cards,” which they then used to purchase their prizes.
The shabbaton was hosted by Rabbi Yakov Dovid and Shaina Borenstein, shluchim to Longmont,  Colorado, and the program included mivtzoim on Friday, inspiring Seder nigunim and seudos throughout Shabbos, motzoei Shabbos swimming, and a trip on Sunday to Northglen Amusement Park. The packed three days culminated in a BBQ and rally, where the  very exciting prizes were distributed.
These shabbatons mean so much to the boys, some of whom live hours from the closest frum family. In the words of Rabbi Eli Kaminetzki, shliach in Taos, New Mexico, “The Shabbaton is an amazing opportunity for our children who need to connect with other kids in a chassidishe and fun atmosphere!” Shaya Itkin, who directed the shabbaton, confirmed this, “it is truly special to bring together young shluchim from so far for a shabbos of achdus, fun  and chassidishe inspiration.” Rabbi Mendy Shanowitz, director of MyShliach, gave a big yasher koach to Shaya Itkin and all the dedicated staff members, Levi Mishulovin, Yossi Elberg Menachem Aron, and Mendel Barber, who took of their time to give these yaldei hashluchim a shabbaton to remember.
MyShliach is a project of Merkos Suite 302, directed by Rabbi Moshe Kotlarsky and run by his son Rabbi Mendy Kotlarsky. MyShliach thanks the Borensteins for graciously opening their home and Chabad House and for all of the time and energy they gave to host the shabbaton. Many thanks to the Shmuel and Yiska Eisenberg Foundation for sponsoring the shabbaton initiative.