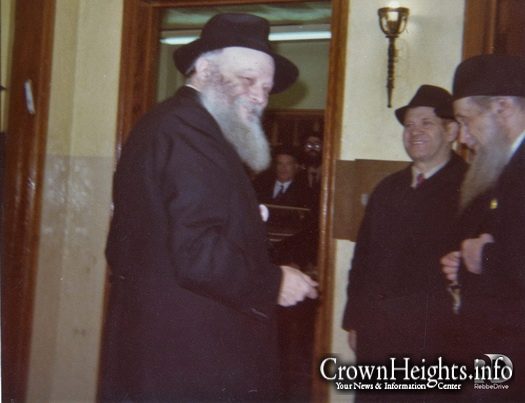 The following story is being shared in the name of Mrs. Sorele Witkes:

I was 11 years old. I had come from London with my father on a trip to New York to see the Rebbe in honor of my upcoming Bas Mitzvah.

During the trip, I was privileged to be able to go into a Yechidus (private audience) with the Rebbe. The day after Yechidus, we were scheduled to fly back home to England.

Before leaving to the airport, we went to 770 for one last Mincha with the Rebbe.

As the Rebbe would go out of his room to go into Mincha, he would hand out coins to children to give to Tzedakah. My father showed me where to stand and he went to get a spot to stand in the Shul for Minchah in the Rebbe’s Minyan.

My father had a camera, which he gave me and suggested that I take a picture of the Rebbe as he came out of his room. This would be a real great souvenir of my trip, but I wasn’t sure if it was appropriate. My father assured me that it would be fine.
I took the camera and waited outside the Rebbe’s room.

I was first in line when the Rebbe came out and was the first one to receive a coin. I then went to the side and picked up the camera to take a picture. The Rebbe looked at me and smiled. I became shy and put down the camera.

In the couple of minutes that the Rebbe continued distributing the coins, this same scene repeated itself. I would pick up the camera; the Rebbe smiled, I would become nervous, and lower the camera.

As the Rebbe finished giving coins to all the children and was ready to enter the Shul, he turned to me and motioned with his hand. With a big smile, the Rebbe said to me, “Nu, nem a picture!” (=take a picture.)