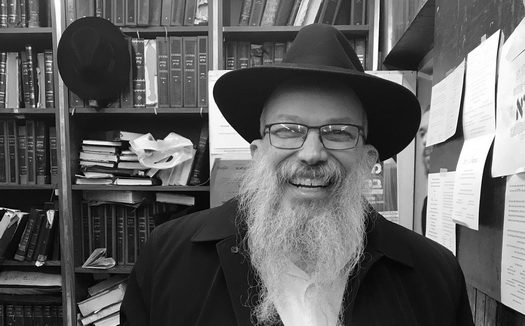 In lieu of a story, I am writing this article as a tribute to my brother Reb Yonah who was niftar this past Wednesday morning.

Yonah was born on Vov (the 6th of) Adar Sheini and was named after our mother’s uncle Reb Yonah Kahan, better known as Reb Yonah Paltover, who raised her and her two surviving sisters, after the loss of their mother and then father as teenagers. Interesting to note that the porochos that was upstairs in 770 for many years was in memory of Reb Yonah Kahan, (who was niftar in his Siberian exile and had no children), was donated by the Rebbe.

My brother’s namesake, Reb Yonah Paltover, was appointed by the Frierdiker Rebbe, to be one of those responsible to make sure that the underground Yeshivos and the Rebbe’s activities would be maintained and continue to function after he, the Frierdiker Rebbe, left Russia. My brother had the same mindset. Any peulah (activity) of the Rebbe was precious to him and he would contribute his assistance towards it.

So while maintaining his own mossad – Sichos In English – was a full-time occupation, yet he made the time and involved himself in fundraising for numerous other activities of the Rebbe. Whether it was raising money for the siyum Harambam when it was in Manhattan, or finding a sponsor to give Chanukah gelt to students in a yeshiva, etc., since that was and remains the rotzon (will and desire) of the Rebbe, he did it.

However, he didn’t only get involved in communal activities. Everyone knows him as one of the premier shadchanim in the community, being the shliach for bringing happiness to hundreds of families. However, on a quieter note, there were many instances where he helped raise money for individuals who were too embarrassed or felt incapable to ask for help in their desperate situation.

As a bochur, he partnered with Reb Avremel Grossbaum to translate the Rebbe’s sichos in English. Their humble beginning began in 5638 (1978) and the Rebbe’s sichos (talks) were typed up on a regular 8 ½ x 11 sheet of paper. He would then go to a copy center in Flatbush, which charged a cheaper price, and make it available for Anash. After a year, Reb Avremel went onto his shlichus to Indiana and Yonah’s shlichus was set.

Over the years, he began expanding and hired additional staff to translate other classics in and of our golden heritage. Whether it be certain fundamental maamorim, such as all twenty chapters of Basi L’gani, and numerous other maamorim of all of the Rebbeim or some of the selected stories that were written by the Frierdiker Rebbe and published in the publication of Hatomim, as well as the entire Likkutei Dibburim, and lately the series of Sefer Hasichos of the Frierdiker Rebbe.

But he was never satisfied with what was accomplished, nor did he become complacent saying that I am doing my responsibility. To him the question foremost on his mind was, what does the Rebbe want to be accomplished? So therefore shortly after the Rebbe initiated the Rambam campaign, of learning all fourteen volumes of the Rambam’s  Mishne Torah, he hired individuals to translate the Rambam into English and created Rambam on the phone. There were numerous times when for various reasons the chapter wasn’t going to be ready on time, so he himself sat down and translated it into the recorder.

Since one of the options the Rebbe gave was that people can learn the sefer hamitzvos of the Rambam, he also had an explanation written on the sefer hamitzvos. True it wasn’t a sicha or maamar of the Rebbe, it was however, the Rebbe’s desire, and it would be fulfilled and brought to the public.

People began noticing that he is a one man production factory; he is constantly publishing more and more seforim. In the fourty-two years he published more than two hundred and fifty seforim, on average over six seforim a year, reviewing each one before publishing it.

So individuals who wrote seforim, I included, began coming to him for his advice and expertise. Although he was overwhelmed in his own obligations, he tried to help them all. His thought process was that since this is another aspect of spreading Torah and the wellsprings of the Torah, he saw it as a the way of fulfilling the mission of l’cheshe’yufootzoo mayoinesicho chutzah of spreading out the wellsprings of Chassidus to the outside and thereby hastening the coming of Moshiach Tzidkeinu.

To him it wasn’t a question of receiving the honor or recognition; it was that the Rebbe’s work must be done. So there are many seforim that he nurtured and produced that do not have his symbol of SIE on the spine, but have the Kehot stamp and insignia, most notably the translation of Lessons in Tanya and the Alter Rebbe’s Shulchan Aruch. He also did so with other seforim, that are not purely Chassidus, such as the Vedibarta Bom.

In the same vein he made almost all of his seforim available on line at no charge, not only the ones that are out of print, but even those that are available for sale, in order that any Jew anywhere, anytime can learn them. The loss of income was compensated by the fulfillment of the Rebbe’s will.

The Rebbe encouraged him and showed his trust in him in various ways. In many of the letters of the Rebbe, one sees that after the letter was written, the Rebbe would make handwritten changes. At that time the Mazkiros (secretariat of the Rebbe), didn’t have a computerized typewriter, (where you can make changes in a letter, without having to retype the entire letter), while Sichos In English did. So there were times when the Rebbe instructed that certain private letters of his be given to Yonah Avtzon to type, and to be given back for the Rebbe to review and sign. There numerous translations of various sichos that the Rebbe edited, and after reviewing some of his seforim the Rebbe instructed that the Kehot logo be placed on it.

Additionally, over the years many people expressed the need to have the Alter Rebbe’s Shulchan Aruch translated into English. In fact a certain Rov began the translation years ago, however, when he asked the Rebbe permission, no permission was given. However, when my brother presented the thought to the Rebbe, initially for the translation of Sefer Haminhagim, the Rebbe permitted him to go forward and gave him specific guidelines, and underscored the guideline that he had previously said, I rely on him. This was understood to mean that the final product is his responsibility.  A responsibility Yonah took extremely seriously in this undertaking as well as in every sefer he published. Even after the translation was reviewed by two Rabbonim, as the Rebbe guided him to do, he reviewed it and corrected (with those Rabbonim’s approval), whatever had to be changed.

May the light of the Torah and the inspiration he shared and gave to thousands of Jews on a daily basis, from the translation and elucidation of the Rebbe’s  Hayom Yom and all of his seforim and projects, inspire us all to rededicate ourselves to preparing this world for the coming of Moshiach. And may it be a source of strength to his wife Rivka shetichye and all of their children sheyichyu to continue in his ways and work.