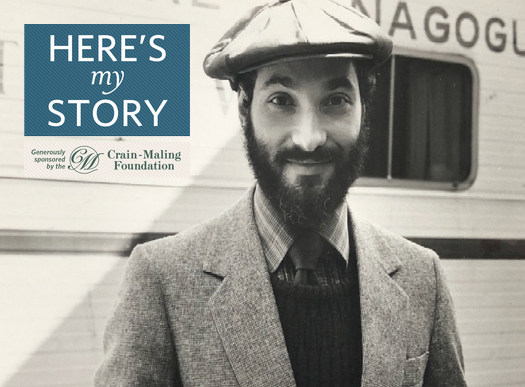 My involvement with Chabad started in 1974 while I was a student at the University of Michigan. One day, as I was walking through campus, a bearded man wearing a black hat approached me and asked, “Pardon me, are you Jewish?” When I answered in the affirmative, he invited me to Yom Kippur services.

This man was Rabbi Aharon Goldstein, the director of the Chabad House in Ann Arbor, and I went on to study Torah with him over the next couple of years, becoming more religiously involved. However, I was still undecided whether becoming fully Torah observant was for me. Additionally, I was fluctuating between two worlds – academia and business – uncertain whether to pursue a degree in psychology or follow one of my other talents and interests, the chief of which was cooking (a true passion of mine).

While in the midst of this confusion, I decided to write to the Rebbe, asking several questions about life. In his response, he began “May G-d grant you the fulfillment of your heart’s desires for good.” I took that to mean that what is important in making a decision such as this is following what feels right in one’s heart. The Rebbe encouraged me further by mentioning the assurance of Talmudic sages, “seek and you shall find,” which means that success requires effort but, as I discovered, even a little effort can go a long way.

In his inimitable way, the Rebbe was able to get me to focus on what I really wanted to do. And at that time, I expressed myself best through cooking, so I ended up operating a kosher restaurant in the Chabad House in Ann Arbor called Jacob’s Table.

In my letter, I also told the Rebbe that, if I ever become religious, I would want to follow the ways of my ancestors who were not chasidim, and I added, “I do not hold by any Rebbe now. My allegiance is to the Yiddishkeit with which I grew up.”

To this the Rebbe responded with a brilliant explanation of what is the role of a Rebbe:

Of course, what is expected of you, as of every Jew, is that the daily life and conduct should be in accordance with the Torah of Life, and this is the very essence of Yiddishkeit. However, inasmuch as the Torah is described as “longer than the earth and wider than the seas” it is normal that no individual, however proficient he is in Torah and mitzvot, and however educated he is, isolate himself from others from whom he can learn a better and deeper understanding of Torah, at any rate, in those areas where he has not yet attained the highest level. This is the function of a Rebbe, a teacher, and instructor who have in their sphere of learning devoted more time and attained a higher level of knowledge, etc.

I showed this letter to one of my friends – Rabbi Zev Gopin, the Chabad emissary at Johns Hopkins University in Baltimore – and he said to me, “Herschel, do you realize that in this letter the Rebbe is essentially asking you to become a chasid?” I hadn’t looked at it that way but, once I did, responding positively became obvious.

Indeed, in 1979, when I moved to New York and started dating for marriage, it was the Rebbe to whom I wrote for advice. In one instance, the Rebbe responded by asking if this young woman was willing to cover her hair after marriage as Torah instructs, but she was not, so the relationship ended. In another instance, the Rebbe responded that this was a good match. I had been undecided, but the Rebbe’s encouragement helped me realize that this young woman was my true soulmate.

The Rebbe gave me clarity because that’s what a Rebbe does. He also advised me that, since the woman who would become my wife was the daughter of a Kohen, she deserved to marry a Torah scholar. So he suggested that I at least learn something from the Talmud. He wrote:

If she is the daughter of a Kohen, [you] should master the content of one tractate – it can also be done in English and one of the small tractates, such as Kallah, etc.

I followed that up with a question, asking if I should pursue full-time studies in yeshivah or go to work. The Rebbe responded that I should go to work but that I should have fixed times for learning, which would also be beneficial for my livelihood and, additionally, if I have more available time, I should learn more Torah. From that time until this day, I have scrupulously adhered to this advice.

After a number of years in the catering business, which included a venture that promoted healthy eating, I returned to my other interest – psychology. I started a program in the New York State prisons called Healthy Strategies for Successful Living, which was based on chasidic teachings. And then I got the idea of starting a wellness center. The Rebbe gave me a blessing for it, and this has led to my career in healing.

So, you see, for someone who started out determined not to “hold by a Rebbe,” I not only became a chasid, but I have led a life that is guided by the Rebbe’s wisdom. And I wouldn’t have had it any other way.

Herschel Lazaroff is the director of the Center for the Advancement of Creativity and Human Potential based in Monsey, New York, and a promoter of healing techniques based on Torah, Kabbalah and chasidic teachings. He was interviewed in July of 2018.