« Camp Emunah: Tuition Break for the First 25 to Sign Up
British PM May Laments Antisemitism in Emotional Speech » 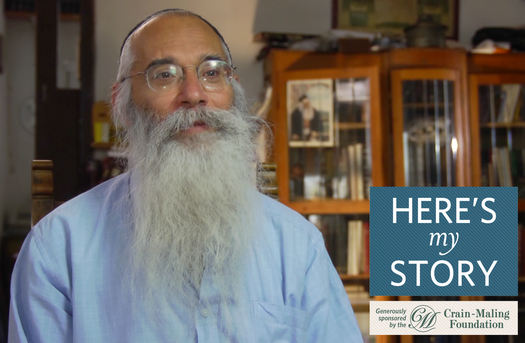 Since 1970, I had been working for the radio station Kol Israel, editing and broadcasting music programs, but after nine years on the job I was not sure that I still wanted to continue. I was then at the beginning of my journey toward becoming Torah observant, and I was being encouraged to enter yeshivah in order to make up the knowledge that I lacked. In addition, I was beginning to doubt whether radio was the proper place for me as an observant Jew.

When the occasion arose in September of 1979 to travel to New York and meet the Rebbe, I decided to seek his advice on this issue.

The Rebbe’s answer surprised me. He said that I should continue working at the radio station. In retrospect, I understand why. A Torah observant person serves as a living example to those with whom he works, and automatically – whether he wants to or not – he is affecting his surroundings. And his influence is greater than if he were to withdraw from the secular world and seclude himself in yeshivah.

To the best of my knowledge, this was the Rebbe’s general approach. He counseled newcomers to Torah observance not to flee the scene, but rather to strengthen Judaism in their natural environment. It worked for me. I witnessed more and more Jews at Kol Israel coming closer to their Jewish roots as a result of my example.

During my audience, the Rebbe also spoke with me about the best uses for one’s G-d-given talents. If someone has a certain talent, no matter what is his field of endeavor, he must use it to spread Torah. If he does not do so, he is harming creation. Why? Because G-d entrusted him to utilize his talents and strengths to do good in this world.

In order to emphasize this, the Rebbe cited the Talmudic story of Rabbi Yehudah HaNassi, who made it a point of honoring rich people. Why did Rabbi Yehudah do this? The Rebbe explained that “rich” doesn’t necessarily mean in silver and gold, but rather in talents and character traits. If people used these for spreading Torah, especially at the time of great hardship for the Jewish nation suffering under Roman occupation, they were worthy of Rabbi Yehudah’s honor.

The Rebbe also went on to address the medium of radio specifically. He mentioned that radio waves penetrate closed doors and places that are normally hard to reach. Radio waves are part of G-d’s creation, the Rebbe explained, quoting the Talmudic sages who taught that everything in creation was meant to be used for spreading G-dliness in the world. Anything new that we discover – such as radio waves – should be used for holiness.

The Rebbe added that those who work in radio must be extra careful. We must never hurt others through this medium by insulting or slandering people, or even just by speaking badly of others. We must watch carefully what comes out of our mouths and keep our language clean of crude or obscene words.

I took his message to heart. I knew well that many songs that we played on the radio used coarse language, curse words and a style of expression that was not appropriate. Therefore, someone like me, who made decisions of what we would broadcast, had to be careful to choose only those songs that were clean. And ever since the Rebbe brought this to my attention, I have followed his guidance in this regard.

After I returned to Israel from New York, I suggested to Gideon Lev Ari, the director of Kol Israel at the time, that we begin to broadcast a class on the Tanya, the seminal work by Rabbi Schneur Zalman of Liadi, the 18th century founder of the Chabad Movement. He agreed, and I turned to Rabbi Adin Steinsaltz, who began to narrate a half-hour Tanya lesson every Sunday. The lesson was broadcasted on the network Reshet Alef, which was very popular, reaching many countries, the Soviet Union among them. Later, I found out that there were groups of Jews who would gather around the radio in various places in the Soviet Union in order to hear these lessons. All this was a result of that first meeting I had with the Rebbe.

About eighteen months after that first visit, I visited the Rebbe again – this was around Purim of 1981. On this occasion, I mostly spoke with him about personal matters, but the Rebbe also asked me how my friends in radio were doing. He knew that we had a small group of ten radio workers who would gather every Friday morning at the office to study the Rebbe’s talks under the guidance of Rabbi Berel Shur.

As I answered his question, the Rebbe took out a stack of dollar bills and told me to distribute the bills to my friends at Kol Israel so they could pass them on to charity. When I left his office, I counted the money and found that there were thirty-three dollars. After I arrived in Israel and returned to work, I divided these dollars among my radio colleagues who were very moved to receive this gift from the Rebbe.

Afterwards, I sent the Rebbe a list of the people who received the dollars, along with the names of their mothers requesting that the Rebbe pray for them. He replied, “I will mention them in prayer at the resting place of my father-in-law (the Previous Rebbe).”

One of the recipients of the Rebbe’s dollars was our director, Gideon Lev Ari, who had established the Tanya broadcast. This gift, along with the Rebbe’s blessing, meant a lot to him, and even after his passing it is still reverently kept by his family.

Until his retirement in 2012, Mr. Avraham Zigman served for decades as a musical editor and program presenter at Kol Israel. He was interviewed in his Jerusalem home in June of 2011.

« Camp Emunah: Tuition Break for the First 25 to Sign Up
British PM May Laments Antisemitism in Emotional Speech »