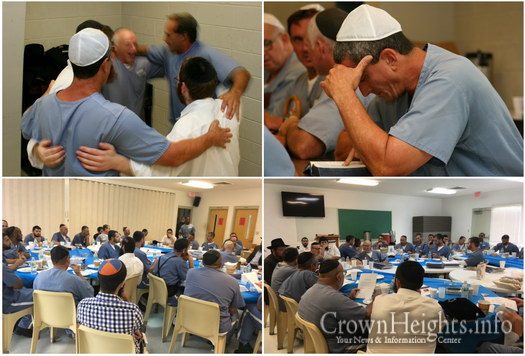 Throughout the years of his leadership, the Lubavitcher Rebbe addressed a topic that had been avoided by leaders for a long time. Raising the plight of inmates who are serving their time in prison, the Rebbe urged reform in the American prison system, encouraging an approach of rehabilitation and training for a life of meaning and purpose. Both while inside the prison walls, and for when they would regain their freedom once again.

As it impacts and changes the lives of so many who others have cast away, Aleph is always finding new ways to uplift and inspire. Now, after much time and effort, they have brought these commitments to an entirely new level. Over the last few weeks, Aleph, in partnership with Jewish Educational Media (JEM), has started to make JEM’s multimedia productions available to inmates, free of charge.

Hosted by JPay, a platform that allows prisoners to engage with the outside world, the videos of and about the Rebbe are currently supported on all of devices in the Florida State prison system.

Rabbi Menachem Katz is Aleph’s director of military and prison outreach. He sees this project as a tremendous tool for educating and rehabilitating the prisoners towards a normal life on the outside. “In the short time that they’ve been accessible so far, Jewish inmates have already reached out to us to express their immense gratitude for the inspiration that these videos have brought them. In testimonials about the new program, some have already described having a crowd of their non-Jewish cellmates joining them as they watch.”

Rabbi Elkanah Shmotkin, director of JEM, hailed this new frontier in bringing the Rebbe’s teachings to the world. “When the Rebbe speaks about changing how we deal with prisoners, you know that sooner or later the vision will come to fruition. But I don’t think we could have envisioned a day when tens of thousands of inmates would be able to watch videos of the Rebbe literally while sitting in their cell on their personal tablet. Suddenly, the Rebbe is inspiring inmates directly and changing their lives even while they are still behind bars.”

The campaign to change the current approach to prison isn’t stopping with the inmates themselves. Rabbi Shmotkin added, “It’s also noteworthy that through the Aleph’s legislative efforts, the Rebbe’s message of prison reform has been reaching a number of officials involved in this area. The Aleph team has been sharing recordings of the Rebbe’s talks on prison reform with legislators, and they’ve had a tremendous impact.”

To those working at Aleph and JEM, this is just another small step in making a much bigger change.