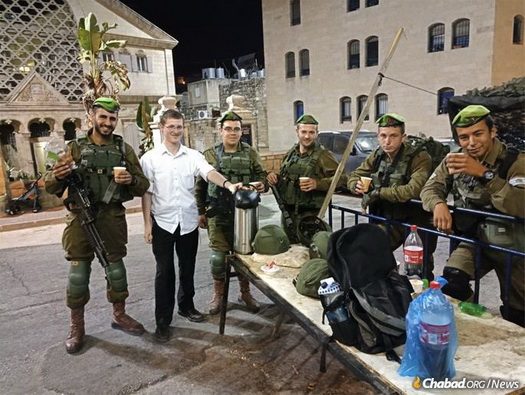 In Terrorists’ Line of Fire Daily, IDF Troops Turn to Chabad of Hebron

With an obvious lump in his throat, a new recruit to the Israel Border Police shared over a break in Safed this past Shabbat that he knew one of the two soldiers laid to rest only a day earlier after being gunned down by a terrorist at a West Bank bus stop. In a thinly disguised effort to assuage his heartache, the young man, who will remain unnamed for security purposes, shared that an elite IDF unit was already closing in on the perpetrator and it wouldn’t be long before he would be brought to justice.

“This is not an easy time for Israel,” he said with trepidation, being away from his U.S. family in the lone soldier program, and only a few months into his tour of duty. “There are at least a few more [enemy acts] planned.”

But his eyes lit up when he noted he would be returning to his base in Hebron right after Shabbat, where he alternates devotedly between guarding the Ma’arat Hamachpelah, the Cave of the Patriarchs, and the general Hebron area.

While Hebron is not a cakewalk for any soldier in terms of tensions and prevailing threats, especially with the recent spate of terrorist acts against soldiers and civilians, he said the assignment is cushioned by the presence of Rabbi Danny Cohen, who with his wife, Batsheva, have been providing a spiritual and emotional buffer for soldiers there for the past 16 years as Hebron’s head Chabad-Lubavitch emissaries.

Now with a look of relief and admiration in his eye, the 19-year-old member of the unit known in Hebrew as Magav (border guard) then told Chabad.org how Rabbi Cohen—with the help of local rabbinical students and at least one of the five emissaries on the Chabad of Hebron staff—makes the rounds to every outpost, checkpoint and base in the area before Shabbat and holidays to make sure the soldiers are buttressed emotionally, spiritually and materially. The program comes complete with delivery of extra rations of cakes, coffee and candles for the Shabbat, Jewish song and dance.

“It is really quite amazing what they do,” he said.

Supporters of those efforts are seeking to raise $613,000, in a 24-hour online drive beginning Wednesday, Dec. 19. at noon EST. To participate, visit their donate page here.

The Cohens, who arrived in 2002, also serve the local residents and the thousands of tourists who stream to Hebron each year from Israel and around the world, but it is the work with the ever-changing shifts of male and female soldiers that have earned them their widespread reputation.

Upwards of 500 troops reside there at any given time. Every four months, the rotation changes, so that over the years thousands upon thousands of soldiers have had their lives touched by the Cohens and their dedicated staff in different ways.

For Rabbi Cohen, who served in the Givati Brigade, and whose oldest son of six children is training to be an IDF paratrooper, helping soldiers materially and spiritually has additional meaning. In many cases, it is the first time that some of these stalwart young Israelis have had any exposure to Torah Judaism.

Among the offerings are Torah classes, and to some of the soldiers, this represents their first exposure to traditional learning.

Of the many yeshivah students in Hebron, there are always two boys who make the rounds of the bases, helping soldiers put on tefillin, while another of the emissaries on staff mans a permanent tefillin booth and coffee corner at the Cave of the Patriarchs.

Batsheva Cohen, who instituted a course of study and special events for women soldiers soon after the couple’s arrival, has watched her weekly classes grow exponentially from four attendees at one army base to dozens of regular attendees at four bases and outposts. Jewish law, Jewish thought, challah-baking, candlestick-making and even a tour of the mikvah (ritual bath) are part of the regular activities that she provides. “For some of these women, this may be the only time they will even see some of these things,” she explained. “Due to the rotation and the sheer number of soldiers we come into contact with, we don’t always get to see how this experience may have impacted their lives.”

The Cohens are quick to emphasize that they were not the first to serve the city in modern times, citing the presence of continuous Chabad activity from the time the city was returned to Jewish hands in the summer of 1967 in the aftermath of the Six-Day War to the present. “Baruch and Sarah Nachshon, for example, with great personal sacrifice, led many struggles to maintain and ensure Jewish presence in Hebron,” notes Cohen, referring to the famed Chabad artist and his wife, “by teaching and disseminating Torah and Chassidus, and feeding and hosting Jews from every walk of life.”

Hebron Chabad history, though, goes much further back, he said.

“My wife and I are part of a storied history that began when the first Chabad community was established here almost 200 years ago.”

In 1844, the granddaughter of the first Lubavitcher Rebbe, Rabbi Schneur Zalman of Liadi, and daughter of Rabbi DovBer, the second Lubavitcher Rebbe, known as the Mittler Rebbe, Rebbetzin Menucha Rochel Slonim, left Russia together with her husband, Rabbi Yaakov Kuli Slonim, to fulfill her dream of living in Hebron. As matriarch of the Chabad community, she would receive guests in her home, which became known as Beit Schneerson (the Schneerson House). Known for her piety and wisdom by Jews and Arabs alike, she gained a reputation as a sought-after spiritual counselor and provider of blessing to many. She died in her ninetieth year in 1888 and is buried in the old Hebron cemetery, where a kollel in her name has been established since.

In 1878, a wealthy Turkish Jew by the name of Chaim Yisrael (Mercado) Romano built a palatial home and guesthouse that was eventually known as Beit Romano. In 1901, the renowned Sephardic sage, Rabbi Chaim Cheskia Medini—the Sdei Chemed—arrived to live there and then established a yeshivah. Learning that the Romano family was interested in selling the property, the Sdei Chemed offered it to the Fifth Lubavitcher Rebbe, Rabbi Shalom DovBer Schneersohn—the Rebbe Rashab—where he established the Yeshiva Torat Emet.

Fast forward to further notable activity and ongoing community building in the most recent of times. For the last three years the Cohens have erected, with the help of an anonymous donor, the massive Chayei Sarah Tent to accommodate in style the thousands of visitors who converge on the city annually on the Torah portion of that name to eat and celebrate. The portion contains the famed story of Abraham buying from the then locals the burial plot for his deceased wife, Sarah, that would also become the tombs for all of the Jewish patriarchs, including Abraham, and the matriarchs except for Rachel who is buried near Bethlehem.

“A beautiful welcome center is also planned for the area outside of the cave,” said Cohen, adding that the beautification of Hebron “to give it the honor it deserves,” in addition to bolstering its spiritual life, has always been part of he and his wife’s mission as encouraged by the Rebbeim (rabbis) of Chabad down through the years. “That will be the next campaign.”

But in the final accounting of all past, future and current activity, Cohen says he looks most forward to the time when the Jewish redeemer will come and take the Jewish people out of exile. “We know that one of his first stops is to awaken the sleeping fathers and mothers [buried in Hebron],” he said. “We hope he will come very soon to wake them up and together with the rest of the Jewish world dance to Jerusalem.”