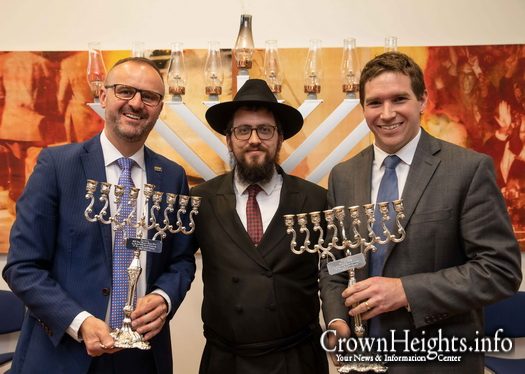 The eight day Jewish festival of Chanukah was celebrated in Canberra with several community events – the highlight being a ceremony including the lighting of the National Menorah in Canberra Parliament’s Reception Room. This year’s theme was “One Small Candle”

A capacity crowd of over 100 VIPs gathered together to enjoy Canberra’s annual major Chanukah event organised by Chabad ACT.

Attendees who enjoyed the function included the ACT Chief Minister Andrew Barr MLA, Leader of the Opposition, Alistair Coe MLA, MLA’s from all sides of politics and Ambassadors and Diplomats from Argentina, Chile, Germany, Hungary, Israel, Poland, Russia and Switzerland. Also joining representatives of the Jewish community at the celebration were leaders from most of Canberra’s large faith and large community groups.

Rabbi Shmueli Feldman, Chairman of Chabad ACT, who MC’d the popular function being held for the fifth consecutive year, acknowledged all the VIPs and commenced the proceedings by delivering an invocation followed by the singing of the Australian National Anthem.

Rabbi Shmueli then gave the annual Chanukah address (see below for full speech). The Rabbi spoke of messages to be learned from the Menorah: “The Menorah was hewn out of one piece of gold which underlines the fact that beneath all of our differences there is a commonality that unites all of us – in Australia we are proud of our society which mirrors the message of the Menorah, diversity of cultures and ways of life but a unity of purpose, respect for human decency and the rule of law.”

He also spoke about the rising tide in antisemitism and the need to combat hatred with light, citing the example of the Shamash – Lamplighter.

In a heartwarming feature following the lighting of the lamplighter, all assembled joined together in the singing of “One Small Candle” composed by American Songwriter Mr Abie Rotenberg.

Chief Minister Mr Andrew Barr MLA, then spoke of the importance of Canberra’s diverse community groups and highlighted the significant contributions which the Jewish community makes in Australia.

Mr Alistair Coe MLA, Leader of the Opposition, spoke of the importance of education and family and how the Jewish community especially cherish both of those important values. He praised the work of Rabbi Shmueli and Rebbetzin Chasia Feldman in the Canberra community and urged everyone to get behind Canberra’s first Jewish school being opened by Chabad ACT in 2019.

The Chief Minister and Leader of the Opposition were both gifted with beautiful silver plated Menorahs with personalized engravings in appreciation of their ongoing friendship to the Jewish community.

Blessings on the Menorah were then sung by Rabbi Motti Feldman of Sydney’s Dover Heights Synagogue. Senior members of Canberra’s Jewish community assisted with the lighting of the candles.

Mrs Nicole Lawder MLA, Deputy Leader of the Opposition, read the letter sent for the event by the Prime Minister of Australia, the Hon Scott Morrison MP.

Cocktails and gourmet finger food with latkes and donuts, Jewish traditional Chanukah delicacies, and L’chaims continued to be served with Jewish music by Rabbi Menachem Feldman being played in the background. All present thanked the hosts for a truly enjoyable and uplifting experience.

Chanukah menorah kits with candles, individual gift boxes containing one small candle and chocolate Chanukah gelt coins, dreidels and guides for the festival were gifted to the guests as a memento upon exiting.

Other events held by Chabad ACT for Chanukah were the Family and Community Chanukah Fair and a ladies donut workshop.