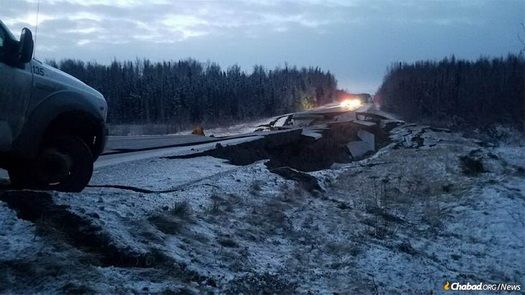 More than 190 aftershocks continued to rattle Anchorage throughout Saturday after a 7.0 magnitude earthquake hit right outside of the city on Friday morning. While no deaths or serious injuries were reported, the Anchorage area suffered serious damage from the quake that sliced opened roads, knocked out power, damaged buildings, and sent fear and panic to the city of nearly 300,000. Thousands remained without power Saturday in below-freezing temperature, and damage to water mains caused thousands to be without water.

The Anchorage airport was temporarily shut down, and many struggled to reach loved ones as many cell towers were damaged. A brief tsunami warning was issued, which was later retracted.

Rabbi Yosef Greenberg, the Regional Director of Chabad of Alaska and rabbi of Lubavitch Jewish Center of Alaska in Anchorage, said he was in the middle of an interview at a local TV affiliate discussing the upcoming holiday of Chanukah when the earthquake hit.

“We paused the interview and dived for cover under a table,” Rabbi Greenberg said. “We remained there for over a minute. It was a state of momentary panic.”

Editor’s note: In the midst of the phone interview with Rabbi Greenberg, there was an aftershock, a common occurrence when earthquakes take place. The rabbi, along with his family, was heard saying, “we need to go to the basement for safety.”

An hour’s drive from Anchorage, Rabbi Mendy Greenberg, the Chabad emissary to Wasilla, was also wrapping up a TV interview promoting Chanukah when the earthquake hit.

“[The earthquake] was extremely hard and strong, and the ground was literally shaking.” he reported. “My kids were frightened. Our power in Wasilla went out and there are broken roads and fallen bridges.”

The rabbi immediately called Catherine Babuscio, the H.R. Director at Mat-Su Regional Medical Center, and asked how he can help.

“[Catherine] said that many people are being rushed in with injuries, and there is panic at the hospital,” Rabbi Mendy Greenberg said. “I will be driving to the hospital to provide aid and moral support.”

“The number one priority is safety, which includes assuring that people have heat,” the rabbi said, “and I’m in the midst of calling all the local Jewish residents and confirming that all are accounted for and doing okay.”