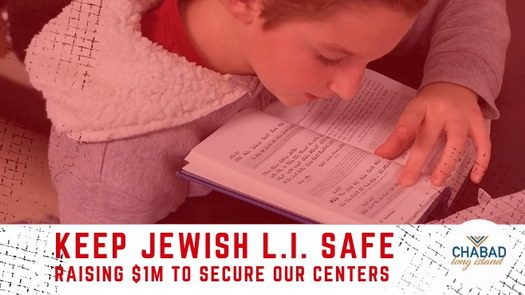 In wake of the deadly Pittsburgh synagogue shooting that killed 11 worshipers and injured six, Chabad Lubavitch of Long Island has announced its plan to raise $1 million to immediately begin implementing upgraded security measures for 32 of its Jewish centers across Long Island.

As synagogues around Long Island and throughout the nation have heightened security, Jewish community leaders have been forced to swiftly revisit difficult questions about synagogue security.

“After consulting with local, state and federal law enforcement professionals, we’ve decided to launch an emergency campaign to raise vital funds allowing us to upgrade security measures at our Chabad Lubavitch Jewish centers throughout the Long Island,” said Rabbi Tuvia Teldon, director of Chabad Lubavitch of Long Island. “Our rabbis have heard from hundreds of members of the Long Island Jewish community over the last few days and the vast majority have expressed their desire for bolstered security.”

According to a study conducted by the Anti-Defamation League (ADL), Anti-Semitic incidents in the United States surged 57 percent in 2017 compared to 2016, making this the largest spike since the ADL began tracking the data in 1979.

What this comes down to is keeping the Long Island Jewish community safe,”commented Jeff Rosner, a resident of Long Beach and member of Chabad of the Beaches, serving the Jewish communities of Long Beach, Lido Beach and Atlantic Beach. “This is about being proactive and keeping people safe. Our community feels more secure and at ease just knowing that there will be a trained guard who will protect us should someone attempt to harm us.”

The Chabad center in Dix Hills is among the many Jewish centers across Long Island that have already hired an armed guard.

“We had parents who were scared to send their children to Hebrew school because there was no armed guard there to protect them,” said Rabbi Yaakov Saacks, co-director of the Chabad Lubavitch Dix Hills Jewish Chai Center. “Our community feels safer and more relaxed. No Jew should ever be fearful to attend synagogue services or Jewish community activities.”

“The state of New York has amazing security grants which help equip buildings with security systems, but that only goes so far,” noted Rabbi Eli Goodman, co-director of Chabad of the Beaches. “Now we’re trying to pick up where those grants leave off. Our goal is to raise $1 million to provide Chabad centers across Long Island with dramatically enhanced security measures, including unarmed security guards at some locations and armed guards at others.”

To donate to the $1 million emergency security campaign, and for more information about Chabad Lubavitch of Long Island, visit www.Charidy.com/SaferLI.

Chabad Lubavitch of Long Island is comprised of 38 centers offering Jewish education, outreach and social service programming for families and individuals of all ages, backgrounds and affiliations. There are 38 centers, including three on college campuses, 20 Hebrew schools, eight day camps, and seven youth group chapters. For more information, visit www.ChabadLI.org.