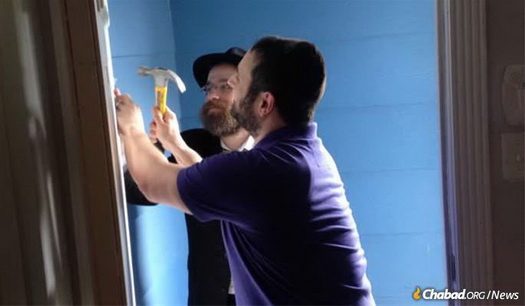 As the extent of the horror perpetrated on Shabbat morning in a leafy Pittsburgh neighborhood is being recognized throughout not just a community and country, but the world, shock and grief have followed in waves. But so, too, has the desire for action, for a concrete response to the worst anti-Semitic attack on American soil, 13 days before the 80th anniversary of Kristallnacht.

“The community is in shock, but they are united,” Yaakov Pelled, a Pittsburgh resident told Chabad.org. “You see families getting together. Jews from all denominations are uniting. In Pittsburgh, acts of kindness and support happen all the time. And at a time like this, we’re seeing it even more.”

In the spirit of unity and Jewish pride so prevalent in the city—and honoring the 11 men and women, most of them elderly grandparents, whose lives were so brutally ended by a murderer who proclaimed, “All Jews must die”—the rabbis, rebbetzins and staff of Chabad-Lubavitch of Pittsburgh have launched a campaign calling for 1,100 mezuzot to be affixed in the Pittsburgh region.

The mezuzah campaign is open to Jews around the globe, who are invited to express solidarity by affixing a mezuzah or by doing another mitzvah in honor of the victims. Condolences, which can be sent via the campaign sign-up page, will be hand-delivered to the families of the victims.

A mezuzah is parchment scroll, on which the Shema is handwritten by an expert scribe.

A mezuzah mounted on the right side of the doorpost designates the home as Jewish, reminding us of G‑d and our heritage. For this reason, it is an ideal symbol of Jewish pride.

It is also a symbol of G‑d’s watchful care over the home. Placing a mezuzah on the doors of a home or office protects the inhabitants physically and spiritually, whether they are inside or outside. In a time when the first reaction may be one of apprehension, the mezuzah reminds us of G‑d’s ever-present protection.

Eleven hundred mezuzot; one hundred for each of the victims who lost their lives in the attack:

Jewish tradition teaches that those who were killed for no other reason than that they were Jewish passed on al kiddush Hashem—sanctifying G‑d’s name—and their souls are in the highest realm. The world they left behind is darker than before, so we respond by bringing more light into the world with acts of goodness and kindness.