« 8:00pm: How Do I Find Myself When I Feel Lost?
Yaakov Shwekey Releases New Music Video » 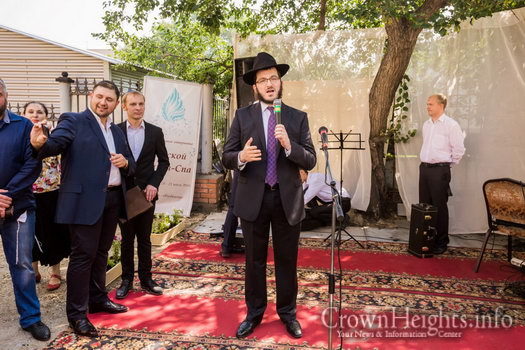 An Israeli-born rabbi serving as the chief rabbi for the Jewish community in Siberia is facing deportation, after apparently being accused of espionage.

Rabbi Asher Krichevsky, a Chabad emissary in Omsk and chief rabbi of the Siberian Jewish community, has faced deportation attempts by local authorities for years amid accusations he poses a threat to “Russia’s constitutional order”.

Since 2001, the 40-year-old Rabbi Krichevsky has worked as an emissary in Russia, alongside his older brother, Rabbi Dan Krichevsky, the Chief Rabbi of Ufa.

Beginning in 2014, Russian authorities have attempted annul residency permits for Rabbi Krichevsky and his family, citing a series of alleged infractions and claiming that the rabbi had “attempted to destroy Russia’s constitutional order” – a charge typically used in espionage cases.

Russian media outlets suggested Rabbi Krichevsky had in fact served as a spy, though no evidence was ever presented against him either by immigration officials or in court.

Since 2003, eight other rabbis working in Israel have been forced out of the country under similar circumstances.

Earlier this year, Krichevsky’s residency permit was nullified on the basis of information provided by the Russian FSB security agency, a court said.

Last month, Krichevsky appealed the decision, arguing in part that no reason or clear accusation was made to justify the nullification.

“It’s a humiliating and insulting practice,” the president of the Russian Jewish Congress Yury Kanner told AFP this June. He questioned how Krichevsky could pose a threat to the state.

“What kind of (constitutional) order is this if it can be threatened by rabbis?”

In January this year in the Ulyanovsk region on the Volga, US rabbi Yosef Marozov, along with his wife and six children, lost their residency permits after Marozov was accused by the FSB of planning or supporting “terrorist activity.” The Supreme Court rejected his appeal.

In February last year, the same happened to Rabbi Ari Edelkopf, a US citizen in the Black Sea city of Sochi, who was also accused of posing a threat to national security.

The Federation of Jewish Communities of Russia, which nominates rabbis to work in Russian regions, said the recent deportations reflected “a new scenario.”

“Previously, (rabbis) got expelled after being accused of minor violations like traffic offences. Today, expulsions are linked to accusations from the secret services,” said the federation’s spokesman, Rabbi Boruch Gorin.

“Their case papers are classified as secret and even lawyers cannot access them. It’s easier to get rid of a foreigner when there are no concrete charges,” he said.

« 8:00pm: How Do I Find Myself When I Feel Lost?
Yaakov Shwekey Releases New Music Video »