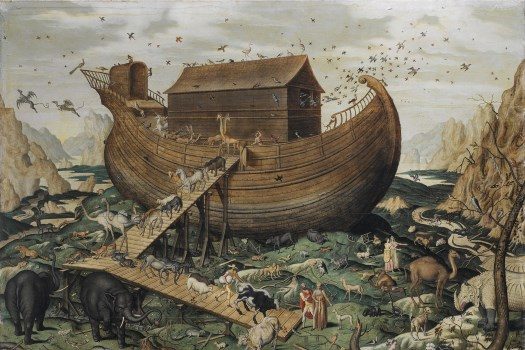 In this week’s parsha (7:7) the possuk states that Noach entered the teiva “because of the flood waters.” Rashi explains that while Noach believed in Hashem, he was also skeptical and didn’t fully believe, so he only entered when the flood waters began coming down in earnest.

I heard from mashpiim the following question. How is it possible that until the last moment Noach didn’t believe that the flood was coming? On that day so many unbelievable things happened. The people threatened to take axes and break the ark, so Hashem sent bears and lions to surround it and protect it. Furthermore, Rashi himself states that the all the animals and birds that were going to be saved, [which were in the thousands] arrived by themselves and Noach didn’t have to assemble them. Wasn’t that phenomenal act enough proof that it was happening just as Hashem stated it would?!

And finally, we know from this week’s parsha that one should not speak bad even about an animal. The possuk states “from the kosher animals and from the animals that are not kosher,” instead of saying “and from the impure ones.” So if the Torah doesn’t speak derogatory about the animals, why would the Torah inform us that Noach was a skeptic?

Through the following story we can clarify this:

As is known, the Frierdiker Rebbe was living in Poland when it was attacked by Germany. The students of his Yeshiva in Otwock were almost all children of chassidim of other Rebbes who decided to learn in Tomchei Tmimim. One of those outstanding Polishe students was Rabbi Zev Volf Greenglass (who later became the mashpia in Montreal).

His former Rebbe (I believe it was the Amshinover, but perhaps someone else) said to him: “Why is it that your Rebbe, the tzaddik of Lubavitch is stating there won’t be a war, when everyone and everybody knows clearly that there will be a war?”

The answer is simple. He is the tzaddik of this generation. If he says there will be a war that means he is resigned to the decree and is accepting it. As the leader of bnei yisroel, he cannot accept it. So he is stating that there won’t be a war, to protest and implore Hashem to lessen the terrible gezeira.

And perhaps this was Noach’s intention as well. If he entered the ark that would demonstrate that he accepts the fact that everyone else, including his extended family, will perish. Therefore, he did not enter the ark, in order to try to avert the decree. He only entered it once the decree began to commence.

Being that in a few weeks will be Chof Cheshvan, the birthday of the Rebbe Rashab, and I began the research and writing of his biography, I decided to share this one point of his life.

When he was three-and-a-half years old, he noticed that many people were waiting to enter the room of his grandfather, the Rebbe the Tzemach Tzedek. So he said, “I, too, want to enter!” However, his older brother Zalman Aharon teased him[1] by stating, “They would never let you in!”

Hearing this, and seeing that others were being allowed to enter and he wasn’t, he began to cry. His grandfather the Rebbe heard his cry and inquired, “Why is he crying?” and instructed that he be brought into his room. He came in with his nanny, and he told her to stand on the side, next to the oven by the wall. He then approached his grandfather and asked, “Grandfather, what are they all asking you?”

The Tzemach Tzedek picked him up and placed him on his lap. He then took his grandson’s hand and placed it into his beard, saying: “Brush my beard, brush my beard, and separate the strands of hair.”

Years later[2] when the Rebbe Rashab related this incident, he added happily: “I believe that I toiled extremely diligently over the years many hours during days and nights, and I brushed it well. [In other words,] I succeeded in unraveling and clearly understanding his thoughts, [clarifying them one by one].”[3]

The Tzemach Tzedek then asked him if he wanted some money, and he replied, “No.”

So the Tzemach Tzedek gave him some coins and said, “Give it to the chassidim, to buy mashke.”

Handing it over to some chassidim, he said, “My grandfather the Yebbe [as a child, he had difficulty pronouncing a reish] gave this for mashke.”[4]

Rabbi Avtzon is a veteran mechanech and the author of numerous books on the Rebbeim and their chassidim. He is available to farbreng or talk in your community and can be contacted at avtzonbooks@gmail.com

[1] The Frierdiker Rebbe notes that although the Raza as a child would tease him often, he was careful not to retaliate, since it is a mitzvah to honor your older brother.

[2] In Sefer Hasichos (summer of 5700, p. 99) it is noted that he said this in Teves of 5676 (1916, shortly after he arrived in Rostov), as a reply to a Shabbos guest. There he notes that the Tzemach Tzedek took hold of his hand and brushed his beard together with him.