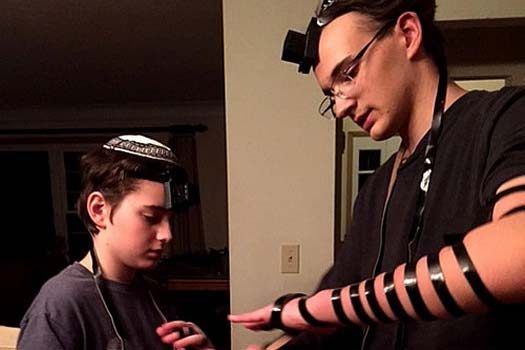 Illustration photo.
by Jack Rubinstein MD, University of Cincinnati
A pilot study led by researchers at the University of Cincinnati (UC) College of Medicine suggests Jewish men who practice wearing tefillin, which involves the tight wrapping of an arm with leather banding as part of daily prayer, may receive cardiovascular health benefits.
The researchers propose that benefits may occur though remote ischemic preconditioning that results in protection during heart attacks. The results are available online in the American Journal of Physiology-Heart and Circulatory Physiology.
Jack Rubinstein, MD, associate professor in the Division of Cardiovascular Health and Disease, and a UC Health cardiologist, says he enrolled 20 Jewish men living in Greater Cincinnati—nine who wear tefillin daily and 11 non-users of tefillin—in the study. His team of researchers recorded baseline information on all participants during the early morning and then additional data after wearing tefillin for 30 minutes.
They measured the participants’ vital signs, drew blood for analysis of circulating cytokines and monocyte function and also measured blood flow in the arm not wrapped with tefillin.
The men participating in the study were between the ages of 18 and 40 and all in good health.
“Tefillin is used for morning prayers for Jewish men over the age of 13 on an almost daily basis,” says Rubinstein. “It is placed on the non-dominant arm around the bicep and the forearm in a pretty tight manner. It is never worn in a fashion as to preclude the blood flow. This is worn for about 30 minutes continuously. Prayers are sitting and standing so often you have to retighten the strap around your arm.”
The usage of tefillin, also called phylacteries, dates back to scriptural commandments in the books of Deuteronomy and Exodus urging the faithful followers to comply with religious law and to “bind them as a sign upon your arm.” Rubinstein says the binding of the arm and the discomfort users often report may serve as a form preconditioning and offer a substantial degree of protection against acute ischemic reperfusion injury (a section of the heart is deprived of oxygen and then damaged when re-oxygenated) that occurs as a result of a heart attack.
“One of the ways that protection occurs is through pain,” says Rubinstein, also a member of the UC Heart, Lung and Vascular Institute. “Feeling pain is actually a preconditioning stimulus.
“We found people who wear tefillin in either the short or long term, recorded a measurable positive effect on their blood flow. That has been associated with better outcomes in heart disease,” says Rubinstein.
Blood flow was higher for men who wore tefillin daily and improved in all participants after wearing it just once as part of the study, explained Rubinstein. Men who wore tefillin daily also had fewer circulating cytokines—signaling molecules that can cause inflammation and negatively impact the heart—compared to non-users, suggesting that near daily use elicits an effect similar to that observed with other methods of eliciting remote ischemic preconditioning-like effect.
For years researchers have studied preconditioning by inducing small heart attacks in animal models and found that they protected the animal from larger, more serious heart attacks in the future. This same preconditioning could be used by partially occluding blood flow in one part of the body and thus serving as a protective element in another part of the body to lessen the injury, says Rubinstein.
“The problem with translating this to people is we don’t know when someone will have the heart attack,” says Rubinstein. “It is almost impossible to precondition someone unless they are willing to do something daily to themselves. Tefillin use may in fact offer protection as it’s worn on an almost daily basis.”
Rubinstein says there are studies out of Israel that have found Orthodox men have a lower risk of dying of heart disease compared to non-Orthodox men. This protection is not found in Orthodox women who usually don’t wear tefillin.
Other researchers participating in the study include Phillip Owens, PhD, and Michael Tranter, PhD, both assistant professors in the UC Division of Cardiovascular Health and Disease, along with Nathan Robbins, Keith Saum, Shannon Jones, Akiva Kirschner, Jessica Woo, Connie McCoy, and Samuel Slone.
Marc Rothenberg, MD, PhD, Director of Allergy and Immunology Division at Cincinnati Children’s and professor of pediatrics at UC, along with Elaine Urbina, MD, Director of preventive cardiology at Cincinnati Children’s  and a UC professor of pediatrics, were co-authors of the study.
The study received internal funding from the University of Cincinnati.