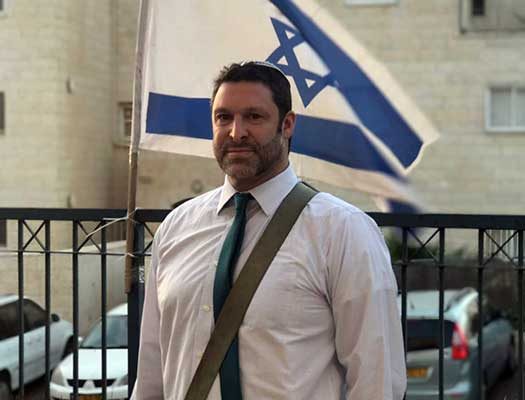 Ari Fuld, Jewish activist and a vocal champion of Israel, died like he lived—“like a warrior”—at the hands of a terrorist Sunday, managing to draw and shoot his trademark handgun while chasing his assailant before collapsing on the spot where he was once seen posing with soldiers.

His surviving family—wife Miriam, four children, parents and grandparents—friends and admirers, along with much of the nation, are in mourning in the wake of the stabbing death. It took place near Fuld’s home near a mall in the Gush Etzion community of Efrat, south of Jerusalem. A 17-year-old Palestinian from the Hebron district is in custody after being neutralized by gunfire. The funeral was scheduled for 11:30 p.m. in the Kfar Etzion Cemetery.

“A guy who gets stabbed in such a way, usually just falls down,” Rabbi Danny Cohen, Chabad-Lubavitch emissary of Hebron and a kindred spirit with Fuld in their common work supporting soldiers, told Chabad.org. “But before he thought about himself, he ran after and shot the terrorist. He lived like a warrior and died like a soldier. I have met few people who were so brave, passionate and in love with Israel.”

Cohen added that Fuld, host of a pro-Israel social media talk show who had attained the status of a public figure for his ardent support of Israel and the Israel Defense Forces, supported soldiers both morally and materially in his capacity as assistant director of the organization: “Stand Together.” “I have a picture of him at the same spot where he was killed posing with soldiers,” Cohen said.

Closer to home in Efrat, relatively new Chabad-Lubavitch emissaries for the English-speaking community of Efrat, Rabbi Shlomie and Mrs. Kiki Newman, were at a loss for many spoken words, but directed Chabad.org to a Facebook post in which they wrote the following:

“Our hearts and prayers are with Ari Fuld’s family. The hurt cuts deep and has left all of us shocked and speechless. Ari was a husband, father, friend, advocate for Israel and the Jewish people and remains an inspiration for us all. His life was taken at only 45 years old in an unspeakable act of terrorism this morning by a Palestinian terrorist. May Hashem [G‑d] comfort his family and loved ones and protect all of us. May we not know any more pain and suffering.’

Fuld, an American-born immigrant to Israel with dual citizenship, himself an IDF soldier and paratrooper in the reserves and member of the Efrat Emergency Response Team, was eulogized further in advance of the funeral by statesmen and family friends alike.

A friend of one of the Fuld daughters, Tamar, 22, from Safed, recalled that when visiting the family’s home on the Shabbat numerous times she always felt secure because Fuld was always armed, the picture of courage, and would pledge undying protection of his family. “This was a real family that hanged together. This was a real father,” she said. “When I heard, I didn’t want to believe it was true. How could this have happened to him?”

U.S. Ambassador to Israel David Friedman condemned the attack: “Ari Fuld was a passionate defender of Israel and an American patriot. He represented the best of both countries and will be deeply missed. May his family be comforted and his memory be blessed.”