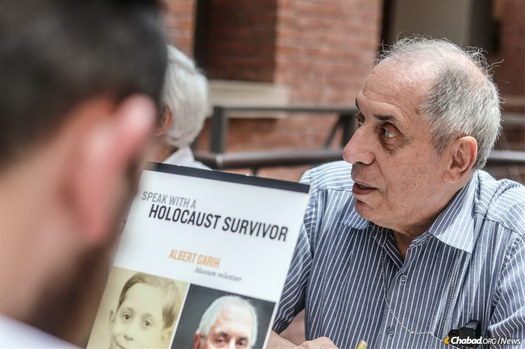 Holocaust museum volunteer Albert Garih speaks with a yeshivah student about his experiences as a survivor.

They sit there day in and day out. Holocaust survivors volunteering at the United States Holocaust Memorial Museum in Washington, D.C.

Carrying the weight of history on their aging shoulders, they greet visitors, share their memories and pose for pictures. Having survived the Holocaust as youngers, their memories of the atrocities are different than those who first staffed the same station when the museum opened its doors in 1993, less than 50 years after the carnage had ended in Europe. Their Hebrew names are Avraham, Yosef and Shalom, and they are all too aware of their position as the keepers of memory, among the last witnesses of the greatest crime in the history of humanity.

On a recent Wednesday, they had an unusual experience. They met with a group of young students who had just toured the museum. Members of the Yeshivas Kayitz (summer yeshivah) of Pittsburgh, they were fascinated to hear the elderly gentlemen’s stories. But then one of the boys asked a question that was unrelated to the presentation: “Would you like to put on tefillin?”

“Here? Now? In front of everybody?” asked the guides.

“Yes, here and now,” replied the students. “But no, it does not have to be in front of everybody, although there is nothing to be ashamed of. We can do it near the coat check.”

One by one, the three men took turns putting on tefillin, saying Shema and praying amid a sea of emotions. One of them had not done so since his bar mitzvah in 1951. Another one of the men used to put on tefillin on a weekly basis when Chabad yeshivah students would visit his office, and was inspired to restart the practice.

“It was very touching for us,” says senior student Shmuly Levertov. “They had come to share their stories, to give others a taste of the Jewish experience. Today, they wrote another chapter of their stories—something that only a Jew can experience.”