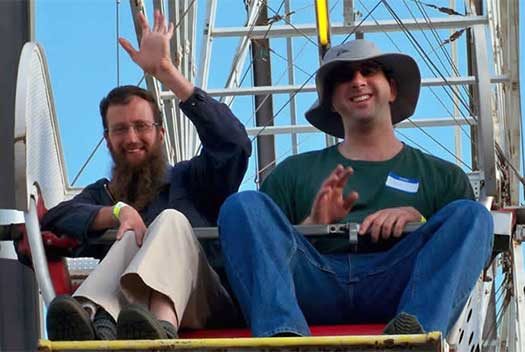 When Danny Green was born with Partial Trisomy 18 (a rare chromosomal disorder similar to Down syndrome) in 1972, doctors knew of only seven other documented cases. They suggested that his parents leave him behind in the hospital; his prospects for life were slim, his chance for a meaningful existence next to none. But Elisheva and Alan Green took their firstborn son home. He grew to be a man with a fearless heart and mighty soul, and he proved those doctors wrong every day of his life. Danny inspired the formation of a leading Friendship Circle in San Diego, where people with disabilities and their families find joy and inclusion.

After 46 years of heralding friendship into this world, Danny passed away on May 15 in Brussels, Belgium, where he was spending Passover with his family.

“He genuinely saw the good in every person and situation,” remembers Elisheva Green. When her family was young and growing, she would bring out dinner to a gaggle of kids at the table. There was always a child or two who felt the need to say “yuck” or complain about the menu, she tells Chabad.org. But every single day, no matter what was for supper, Danny would smile at his mother and say, “This is my favorite one!”

Unwittingly, Danny created an attitude that permeated the household—one that didn’t dwell on deficiency but recognized positivity. As the family grew closer to Judaism, it was Danny who reflected Torah values most naturally, they say. While popular culture glorifies the body and the age of technology reveres the brain, Torah teaches that the soul is the most important thing of all. “Danny had the best soul,” a friend recalls. His instinct was to love, not hate; his impulse to give, not take. “I believe he was an example for his siblings and their friends,” shares Elisheva Green. The people around him automatically absorbed some of his goodness.

Once, Danny’s younger brother, Orin, went to Camp Gan Israel. On the first day of camp, a boy with no arms climbed off the bus and the camp directors gulped, envisioning an endless summer dealing with this sure-to-be outcast. When Orin met the boy, the first thing he noticed were two strong legs. “Let’s play soccer!” he shouted to his friends. By the end of the day, the boy was totally accepted by the group.

That was Danny’s influence. His good humor and disposition made him easy to love, but finding the right niche to develop his skills proved to be a challenge.

Family Inspired by a Meeting With FDR

“I grew up in a home where education was a top priority,” says Elisheva Green. Her father, Morton (Mordechai Chaim) Rewen, contracted polio at the age of 12. There was no special education available, so his dedicated mother homeschooled him for four years. When he was 16, Morton was accepted to Columbia University. He had always loved playing sports, and despite his promising academic future, he could not help feeling depressed by his physical condition. Elisheva Green’s grandmother would not give up on her son.

“She somehow arranged for my father to meet with the governor of New York, who had also survived polio,” she recalls. The governor’s name was Franklin Delano Roosevelt. The future president of the United States sat for an hour with Morton, convincing the young teen that his life was not over. Teaching him that while every person has weaknesses, a true hero finds his strengths and chooses to focus on them.

Just like her grandmother, Elisheva Green would not give up on her son’s future. At the time, there was no Jewish educational institution that could cater to her son, so Danny joined a special-education track in public school. There, he learned to explore his talents and push his academic skills to their utmost potential.

Although Danny enjoyed school, he found true pleasure in fulfilling Torah and mitzvot. The Jewish commandments do not discriminate; Danny could fulfill the mitzvah of putting on tefillin just the same or with even more passion than his mainstream friends and neighbors. Danny made it a priority to pray three times a day. He observed Jewish holidays with an excitement other boys reserved for baseball. Sometimes, he would meet strangers at the supermarket and excitedly teach them how to make a blessing on food. His Jewish identity and expression were a source of deep pride.

When Danny’s siblings married and moved away from home, he found himself isolated for the first time in his life. The Jewish Community Center of San Diego had an excellent inclusion preschool program, but there weren’t any suitable programs for families or older children with disabilities.

Danny loved the San Diego Friendship Circle, which has been called a “national role model.” He always arrived early to help set up and stood by the door to greet every guest personally. While his mother worked tirelessly as the executive director, Danny poured his energy and smiles into making the Friendship Circle a place where every person felt welcome.

“When Danny turned 40, he wanted to change his name,” says Elisheva Green. “So we started calling him Dan. It made him feel like more of a man.”

“Dan the Man,” as he was nicknamed, was a man of many smiles. There was the exuberant beam that shined on his face when he met a buddy from his special-education program; the professional smile he flashed when a customer walked into the Gap clothing store where he worked; and perhaps most powerful of all—the boundless grin he shared to cheer up a sad child in the local preschool where he served as a teacher’s aide. It is no wonder that Danny was the inspiration for a program that brought immeasurable friendship to hundreds of families in San Diego.

In the last weeks of Danny’s life, many family, friends and strangers—touched by Danny’s beautiful heart and soul—committed to positive resolutions in his merit. The family encourages people to sign up here for more mitzvah pledges in his memory.