« Live at 6pm: Historic Event in Hebron
Texas Tribe Gets their Shabbat On at Shabbaton » 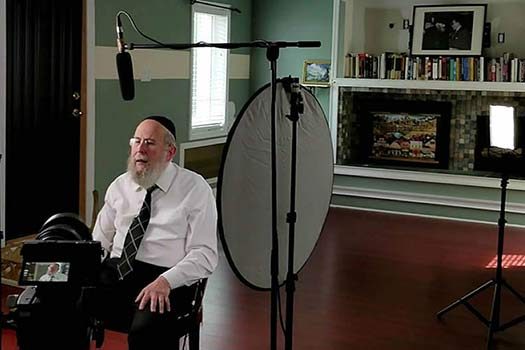 Rabbi Yehuda Refson, Chabad emissary to the city of Leeds, England, will lead a four-part course titled “Soul Talk,” to begin on March 19.

Look around the world and observe a dizzying array of elements, movement, color and creativity. What’s behind it all? Is there purpose in the seemingly endless struggle for survival and the human quest to live better? Is the soul for real?

These are some of the questions that have intrigued and plagued humanity for all time—from prophets and philosophers to theologians and thinkers. Many answers have been suggested, debated, refined and then redefined in the course of history.

At the cusp of the 18th and 19th centuries—as the Enlightenment (or Age of Reason) was taking hold and the seeds of the Industrial Revolution were being sown—a revolutionary book of mystical dimension was making waves in Jewish communities across Eastern Europe. Popularly known as the Tanya, the 54-chapter book detailed how a Jew is to serve G‑d—maintaining inspiration, optimism, faith and motivation even when inevitably faced with challenge and failure.

Almost as if to set the stage for the chapters to come, the Tanya devotes substantial text to explaining the interplay between good and evil, and describing the makeup of the human soul (positing that there are actually two competing souls that vie for control). Written in Hebrew and aimed at the advanced scholar, the Tanya can seem as a formidable text to master.

In the latest offering from Chabad.org Courses, Rabbi Yehuda Refson, Chabad emissary to the city of Leeds, England, will explicate these issues in a four-part course titled “Soul Talk,” to begin on March 19 and continue every Monday for four weeks.

“We will endeavor to explain the Chassidic concept of the soul—the fourth dimension in creation, the G‑dly energy that exists within everything and the power in the soul of humankind to elevate that energy,” Refson tells Chabad.org.

“We will look at the great heights of potential embodied in the human soul and the struggle of man to fulfill his own potential, as well as the potential of the world in which he lives,” he continues. “We will look at the challenges human beings face, internally and externally. And we will call on stories from the lives of great people who have exemplified success in that struggle.”

Each of the four lessons sheds light on another building block of the Tanya’s contribution to the Jewish approach to G‑d, religion and life.

In the first one, Refson will discuss the Tanya’s approach to the soul, both that of humans and other life forms. The second lesson tackles the interplay between the human soul and real life. In part three, the rabbi will examine evil—how something that can be so destructive fits into G‑d’s plan. The final class explores the paradox of a G‑dly soul existing in an earthly body. Spanning teachings from the early sages all the way through to the Six-Day War, this concluding class offers an eagle-eye view on the wisdom gained in the previous three lessons and leaves participants with the answer to an age-old question: Can people reallychange for the good?

Rabbi Yaakov Kaplan, who produced the course, says the curriculum strives to answer fundamental questions, such as “why are we here, what’s happening inside us, and what does it all mean?”

Refson agrees, but takes it a step further: “I hope that participants find encouragement to recognize their own capacity . . . that they discover that challenges are opportunities to allow them to reach greater heights.”

To enroll in this free online course, visit the course page here.

« Live at 6pm: Historic Event in Hebron
Texas Tribe Gets their Shabbat On at Shabbaton »