« Video: How Can We Create Real Relationships?
In Parkland and Coral Springs, an Area-Wide Shiva for the Fallen » 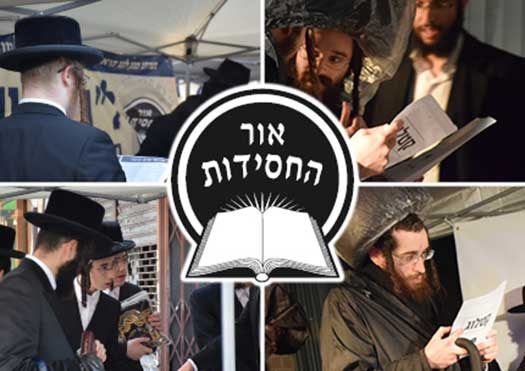 Just a few years ago, it seemed impossible. Today, a quiet project started by two bochurim shares the Rebbe’s Torah with over 100,000 delighted Litvish and Chassidishe fans.

Walk into any Lubavitch home and you’ll recognize the familiar row of gilded brown Likkutei Sichos, a testament to how central the Rebbe’s Torah is.

But what about homes in Lakewood, Monroe or Bnei Brak? That’s the burning question that Avreimi Mann and Yossi Margolis had back in 2004, as bochurim in Kfar Chabad Yeshiva.

In his bustling basement office in Crown Heights, Mann, now director of Or Hachassidus, recalls the realization that launched his quiet organization, and how it has reached an astounding level of popularity in places not previously thought to be Chassidus-friendly.

“Over and over, the Rebbe shared that he edited his talks and encouraged their publication for one reason only: to spread the light of Chassidus ‘to the outside.’” Yet, speaking with Yidden in a Moshav just outside Kfar Chabad, the bochurim found that, while some had heard of the Rebbe from the occasional news report, most had no knowledge of the Rebbe’s message.

“Amazingly, as millions were drawing near through contact with Shluchim and online content, the Frum world simply hadn’t encountered this precious spring of knowledge and perspective on a large scale.”

Mann and Margolis decided to find out why.

“A lot had to do with style,” they discovered. Unfamiliar with the Rebbe’s method of teaching, many people could not find their way into an idea, or were looking for a quick vort to share rather than an involved essay to study. They dismissed Sichos with a sense of anxiety rather than curiosity.

The pair began to carefully extract individual teachings from the Sichos and rework them into daily, weekly and seasonal messages that resonate with Litvish and Chassidishe audiences. They printed a dozen pamphlets to share with the Moshav. The response was inspiring.

Thus was born Likras Shabbos, a weekly Torah magazine presented by topic—Pilpul, Parsha, Halacha and more—appealing to those more comfortable delving into a defined “sugya” than a wide-ranging Sicha.

After getting married, Mann formalized the project into an organization with a powerful mission: to shine a living light where it has never been seen before, in a way that has never been done before.

Today, Or Hachassidus has grown into a publishing powerhouse, led by a team of 16 researchers, writers, editors and designers in Israel and New York.

You may know it for its iconic Daily Lightpoints and Penina Yomis delivered each morning to 25,000 email subscribers and 350 shuls; its more than 15,000 Likras Shabbos booklets read in 3000 shuls in 150 cities; and its periodic Seforim of the Moadim.

Additionally, the organization is known for its fittingly-themed “BAYIS (+Molei Seforim) RAFFLE,” the winner of which receives six-months’ rent or mortgage payments and 100 Chassidus seforim.

Each week, the Or Hachassidus team receives dozens of emails, texts and phone calls describing a fresh and refreshing perspective on life gained through access to Pnimius Hatorah. Often, writers are surprised by their own craving to see more, feel more and do more.

If it all sounds like Moshiach, that’s just the point.

R’ Yoel Kahan, the Rebbe’s chief Chozer explained the magnitude of what Or Hachassidus is achieving. “When someone starts learning Chassidus, especially the Rebbe’s Sichos, he gains a new attitude about what it means to be a Jew,” he explains. “[Sichos give a new perspective on] the meaning of Torah, of Mitzvos, of Moshiach, of the very purpose of creation.”

Reflecting on the explosive growth of the project, Mann says he was sure that an honest effort to share the Rebbe in a new way would bear fruit. It was just a question of how long it would take.

“When you set up a lantern,” he quotes from Hayom Yom, “those who seek light gather around it. Light attracts.”

For a chance to win six-months rent or mortgage and 100 seforim, click here

« Video: How Can We Create Real Relationships?
In Parkland and Coral Springs, an Area-Wide Shiva for the Fallen »