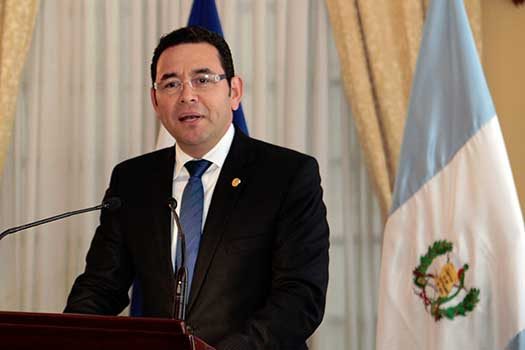 As part of the Central American president’s trip to America, which included a meeting in the White House with President Donald Trump on Thursday, Morales said he was interested in experiencing a traditional Shabbat dinner.

Led by Morales, Guatemala was one of a handful of countries that followed the United States in formally recognizing Jerusalem as the capital of Israel in December. At the time, Morales also pledged to move his country’s embassy from Tel Aviv to Jerusalem.

“President Morales is a man of faith, a believer in the Land and People of Israel, and in tradition,” Rabbi Mendy Weitman, who co-directs the Jewish Latin Center with his wife, Frumie, tells Chabad.org. “He feels a close connection to the Jewish people and wanted to experience a Shabbat meal.”

Some 200 people are expected to attend the dinner, complete with kiddush, hamotzi and chicken soup. In addition to the president’s retinue, guests will include the first lady of Guatemala, Hilda Patricia Morales; U.S. Ambassador to Guatemala Luis E. Arreaga; and Consul General of Israel Dani Dayan.

During the meal, Weitman will honor Morales for his recent recognition of Jerusalem as Israel’s capital. “We all have an inner Jerusalem, an undisputed spiritual core,” says Weitman. “It’s our purpose in life to find it, get in touch with it and recognize it in all we do.”

The Jewish Latin Center was founded eight years ago as “a home away from home” for the thousands of Latin American Jews living in New York City. Today, Weitman describes it as “a growing community of some 1,600 people, looking to connect with the Jewish experiences they had growing up in a warm and welcoming environment.”