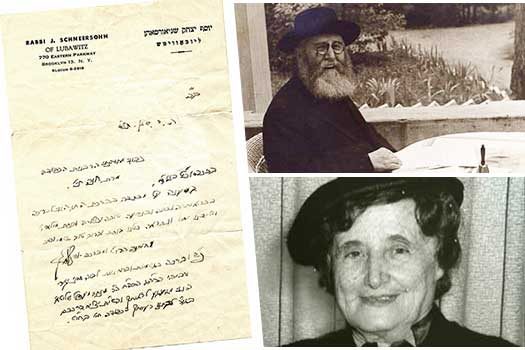 In honor of the 53rd yahrzeit of the Rebbe’s mother, Rebbetzin Chana Schneerson, of blessed memory, Kehot Publication Society is pleased to release a never before published letter by the Frierdike Rebbe to Rebbetzin Chana.

The letter was sent to Rebbetzin Chana as she was about to embark on her journey from Paris to New York in Sivan of 1947, with blessings for a safe journey.

Her son, the Rebbe, had flown out from New York to greet her and accompany her on her transatlantic passage to the United States.

The Frierdike Rebbe concludes his letter with an extraordinary expression of longing to see his son-in-law, our Rebbe, who had spent three months in Paris arranging his mother’s documents and spending time with the war-weary Chasidim who had recently arrived in France.

The letter is supplemented by two other letters and a telegram by the Frierdike Rebbe to Rebbetzin Chana, as well as a brief description of the Rebbe’s activities in Paris during that three-month stay.

An exquisite image of the letter is also presented in this commemorative booklet.