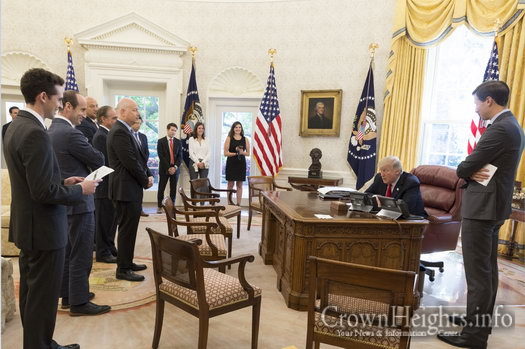 The White House has released a transcript of the remarks President Donald Trump and his son-in-law Jared Kushner made over the phone to a group of Jewish Leaders — including, for the first time, representatives from Chabad-Lubavitch — ahead of Rosh Hashana:

MR. KUSHNER: Welcome, everybody, and thank you for joining us here today. This is the most special time of the year for the Jewish people. This Wednesday evening begins Rosh Hashanah, the first of 10 days of repentance, that concludes with Yom Kippur, the Day of Atonement.

Since January 20, I have had the great honor of serving in President Trump’s administration. Anyone that knows the President understands that he takes great pride in having a Jewish daughter and Jewish grandchildren. His love and respect for the Jewish people extends way beyond his family, and into the heart of Jewish American communities.

Under the President’s leadership, America’s relationship with the State of Israel has never been stronger, and our country’s commitment to Israel’s security has never been greater.

It is my great honor to introduce the 45th President of the United States, Donald Trump.

THE PRESIDENT: Good morning, and thank you for joining this call.

To the many leaders, Rabbis, and Jewish friends who are on the line, I am delighted to speak with you and to wish you Shana Tova, a sweet New Year.

I send the Jewish community my warmest wishes as we approach the High Holy Days.

The Jewish tradition of making time and taking time each year to rededicate your lives to the sacred values you hold dear not only improves yourselves but strengthens our nation and inspires us all.

I know with us today on the call are several Holocaust survivors. We are honored beyond words by your presence. You have borne witness to evil beyond human comprehension, and your perseverance is a lasting inspiration to us all. By telling your stories, you help us to confront evil in our world and we are forever grateful.

That is why my administration has successfully pressured the United Nations to withdraw the unfair and biased report against Israel — that was a horrible thing that they did — and to instead focus on real threats to our security, such as Iran, Hezbollah, and ISIS.

This next New Year also offers a new opportunity to seek peace between the Israelis and Palestinians, and I am very hopeful that we will see significant progress before the end of the year. Ambassador David Friedman, Jared, Jason, and the rest of my team are working very hard to achieve a peace agreement. I think it’s something that actually could happen.

I am grateful for the history, culture, and values the Jewish people have given to civilization. We forcefully condemn those who seek to incite anti-Semitism, or to spread any form of slander and hate — and I will ensure we protect Jewish communities, and all communities, that face threats to their safety.

I want to thank each of you for the ways in which you contribute to our nation. America is stronger because of the many Jewish Americans who bring such life, hope, and resilience to our nation.

Melania and I wish everyone a sweet, healthy, and peaceful New Year. Thank you very much.